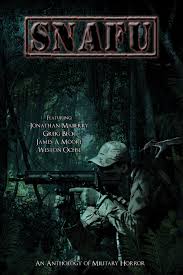 The phrase seems almost as tiredly redundant as the time-worn joke about “military intelligence” is oxymoronic. After all, by its nature, the military is expected to deal with horrific things. That is a given.

But when the already difficult and dangerous job of soldiering meets…well, other things, the term “military horror” takes on entirely new meanings.

SNAFU collects seventeen thrillers, tales in which otherwise deadly military operations ramp up even further with the addition of the outré, the mabacre, the un expected, and whole ranges of things bloody and gruesome. To increase the interest, settings range from 48,000 BC to 50,000AD; from nineteenth-century India to the twenty-first-century Pacific Northwest; from the coast of Japan during World War II to the scene of battle in the Civil War; from San Francisco in the 1960s to Berlin in the…well, you get the idea.

Let’s look briefly at a few of my favorite offerings (although by rights I should list every story in the book):

Solid, every one of them.

If I have any objections to the stories, it would be that several just aren’t long enough. They read like chapters; they engage me with fascinating characters—both villains and heroes—follow exciting adventures, then concluded by intimating deeper problems, more dangerous situations…and I want to read more! Seems like a healthy objection to well-imagined tales.

Not one of the stories failed to attract and hold my interest. Not one of them failed to suggest new ways of looking and old monsters, and old ways of looking at new ones. It’s been a while since I’ve encountered a collection whose authors  responded to the theme with such wholesale enthusiasm or one that so neatly defined and redefined its title: SNAFU.