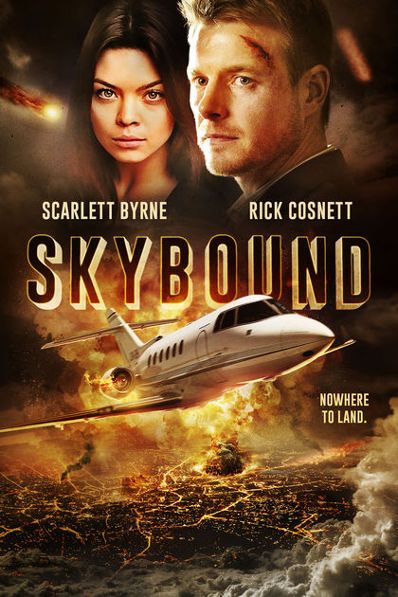 I don’t remember where I originally saw the trailer for this movie, but when it popped up on my Interests list, I knew I had to see it. The amazing views – remember the running bison – and idea of being in this situation (NO SPOILERS) simply blew my mind. So, did Skybound fly me off my seat?

A few friends (listed by couples), Matt and Lisa, Oden and Roxy, decide to leave Canada and head for the states for a three-day holiday. They’re even traveling in style – a gorgeous private jet – but soon are interrupted when an “uninvited” guest happens along. He’s the brother of Matt, our pilot and Lisa’s ex-boyfriend and VERY much needed to raise this movie from the ground, over Lover’s Triangle.

While in the air, they discover something’s wrong – for all planes in the sky! And there is where I end the retelling, but I can say it feels very familiar. I’ve seen a lot of movies where they have to stay above so many miles per hour or the bus will crash – erm… crash and burn, which is why I believe I got caught up in the story. It carried some coolness, but so much ridiculousness, I found myself being one of THOSE guys!

I found myself shouting “You can’t do that!” and “What the what?” so many times… I sorta felt cheated. The story line was decent and most of the visual FX were fabulous, but there was so much that just wasn’t right. Had it been corrected, it would have shifted the movie’s ending. And let’s face it, friends, anytime someone prattles on with a three-minute, rousing (not) speech, you know they’re gonna die!

Skybound is entertaining. I’d even venture to say it was okay, but you have to overlook the aerial as well as apocalyptic facts, along with the weak acting. Check out Skybound where ever video can be streamed or purchased on DVD.