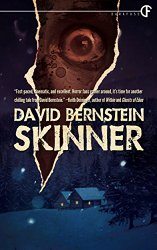 Skinner, the latest release from David Bernstein, takes a few common horror conventions and turns them into something a bit different. The story finds six twenty-something friends driving to a weekend at a deserted cabin, stopping at a questionable gas station and falling victim to a serious car accident. The plot transitions from slasher opening to survival horror to supernatural monster tale in interesting and unexpected ways.

Bernstein’s characters are fun and ultimately relatable, even if they are lacking a bit in development and backstory. They play off of each other well and their tangled relationships ring true, especially when a secret shared by two of them comes to the attention of the others. The character arcs are often surprising and free, for the most part, of the standard horror stereotypes. The villain is also interesting, a new version of one of the great monsters of the genre.

The set-up for the story is a bit slow but kicks into high gear when the friends are involved in a terrible car accident while driving through the snow to their remote destination. The crash results in a varying array of injuries and the players being stranded in the woods with an inoperable car and very little shelter. What looked like a slasher story quickly becomes survival horror. The friends must survive the elements and, more troublingly, each other.

As things proceed a supernatural element comes into play, as the biggest threat to the friends transitions from each other to the wolves in the woods. These are wolves that are not at all traditional werewolves, but a new interpretation of the underlying mythos of lycanthropy. It’s an interesting take that adds to the overall story and provides a unique point of view.

Skinner is a well written and entertaining novel that will deliver a quality read for most fans of the genre. The slightly slow development of the story and occasionally thin characterization is easily overcome as the plot keeps twisting in ways that are unexpected and interesting. Once the novel moves into its second half an act of violence erupts that throws things completely up in the air and assures the reader that nothing, for the rest of the novel, can be taken for granted.