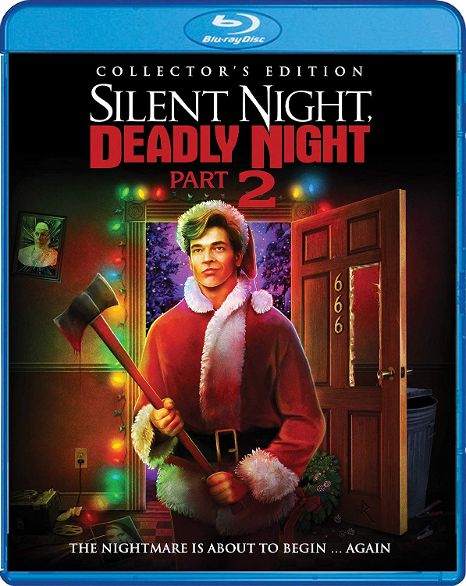 A sequel to the movie that pissed off moms, Christians, and Christian moms everywhere, despite it not being the first movie to feature a killer Santa, but whatever. A sequel to the movie that was yanked from theaters despite beating the original A Nightmare on Elm Street at the box office when both were released on the same weekend. So you combine controversy with a proven money maker and you just know the sequel has got to be good, right? Right? Well, grab your axe, your best Santa suit, and a load of patience and let’s find out.

Oh and, “garbage day!” There, now that the one thing people know about this movie is out of the way, we can move on.

SNDN 2 starts off with the younger brother of the first Santa killer, now a grown man, in an insane asylum being interviewed by a shrink. Seems that after watching big bro Billy, the OG psycho, get gunned down right before his eyes, Ricky went a little nuts too. All this is just a set up for some flashbacks to the first film, and when I say some, I mean a whole hell of a lot. As in the first 45 minutes of this 88-minute-long movie is just clips of the first film. So in my book that makes this movie hardly a movie at all. At least not a feature film.

After the flood o’ flashbacks, Ricky escapes the asylum and starts a killing spree, again, with a mind to get the mother superior nun from the first movie who was horrible to both him and his brother. And that’s about it for this one. It has a few cardboard characters, a few underwhelming kills, one memorable line thanks to YouTube making it a meme, and a killer that acts with his eyebrows. Seriously, watch him, you can’t unsee it.

On to the extras Scream Factory did as presents on this new Blu-ray. There is an audio commentary track with director and co-writer Lee Harry and actors Eric Freeman and James L. Newman. There is a second audio commentary with Mr. Harry, fellow co-writer Joseph H. Earle, and actor Newman. There is a one-hour-and-fifteen-minute retrospective on here; that’s longer than the actual new footage they filmed for this movie. Wow. There is an interview with make-up effects artist Christopher Briggs that is a very respectable one hour and two minutes. Again that is longer than…okay, you should get it by now, so I’ll leave that dead horse alone now. There is a 19-minute featurette on the locations where the film was shot. There is an eight-minute short film called “Ricky Today” that stars Eric Freeman who was Ricky in this movie, so that was cool. There is the ever-present theatrical trailer and a trailer for a documentary on Eric Freeman called Finding Freeman that I never heard of until now. Cool.

Silent Night, Deadly Night Part 2 is not a good movie no matter how you cut it, and the needless first half of the film angers me, but the second half is goofy, over-the-top slasher fun. No, it’s still not all that good, but it can be enjoyable if you’re into that kind of thing. I am and so I do. If that sounds like you too, then give this one a try. If you are already a member of the “Garbage Day!” cult then you owe it to yourself to pick up this new Blu-ray from Scream Factory as it is loaded with goodies and looks and sounds better than ever.