‘Sick: Survive the Night’ Will Infect Us This January 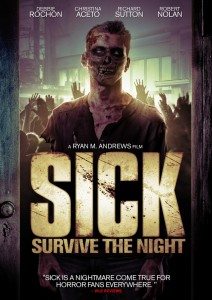 Midnight Releasing is proud to announce the DVD and VOD release of Sick: Survive the Night, available January 6, 2015, on DVD and VOD.

In the tradition of The Walking Dead, Sick: Survive the Night tells the story of a group of people who band together after a zombie outbreak. Debbie Rochon (Tromeo & Juliet), Christina Aceto, Richard Roy Sutton, Jennifer Polansky, and Robert Nolan star in a Ryan M. Andrews film.

Synopsis:
Two years into the outbreak, the remaining people struggle day to day for survival. With the infected more active at night, three people seek shelter in an empty home, but with supplies scarce, they’ll be lucky to make it out alive.