Shock Totem #8: Curious Tales of the Macabre and Twisted – Review 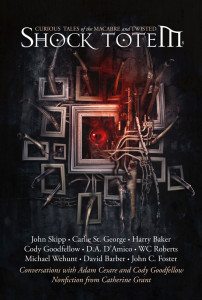 There are plenty of writers over at Shock Totem. So many in fact it’s a good thing to show examples; John Shipp, Carlie St George, Harry Baker, Cody Goodfellow, DA D’Amico, WC Roberts, Michael Wehunt, David Barber, John C Foster with Conversation from Adam Cesare, Cody Goodfellow and Non Fiction from Catherine Grant.  All have their own respective styles and finesse at weaving a very immersive short story. Horror fiction that makes you think is a valuable commodity in the fiction world.

Shock Totem is a magazine that looks suspiciously like a book. In the range of mag books out there this fares very well and started out life in July of 2009 with its first ever issue #1. What sets it apart from others are the writers and poets and the various covers by Japanese artist Mikio Murakami that depict a whole other world, time and alternative space which looks to the human eyes as unsettling. Issue #8 with its black cover and spider behind a series of frames is one such powerful image.

Starting with Notes from the Editor’s Desk, K Allen Wood mentions the reason why Issue #8 is a little behind schedule (and it may warm your heart). There is Joe Modzelewski’s insightful article on vampires in movies, and then it’s off with the fiction, poetry and of course non-fiction. Shock Totem can be described as a platform for many diverse writers who all have the similar ability to tell an engaging story that takes readers to another world filled with dark and strange corners. Joe Modzelewski’s article takes us through the early movies based on Bram Stoker’s Dracula such as Nosferatu, then mentions much newer movies later generations will be more able to understand. As for the stories, there are many settings for them, Hell being one of them and the two people who take a journey there. There are ghosts, a tale of a girl who wants to get along with her father and an escapee from war torn Vietnam.

The magazine does not suffer from there being no letters page; its order is different from other publications of this genre. It starts with a well written article that sets the mood for the rest of Issue #8. In between the stories there are a couple of interviews with Cody Goodfellow by John Boden and a conversation with Adam Cesare by the same writer. Howling through the Keyhole is also different from most other magazines as this is the few pages used to tell the reader what inspired the writers to tell such stories. And WC Roberts has the privilege of having the only poem in the entire publication. Shock Totem’s reviews are short, informative and give enough so that the reader does not become tired by too many details. There is dark fiction from all angles that invites the reader into a series of existences where no one is what they might at first appear.