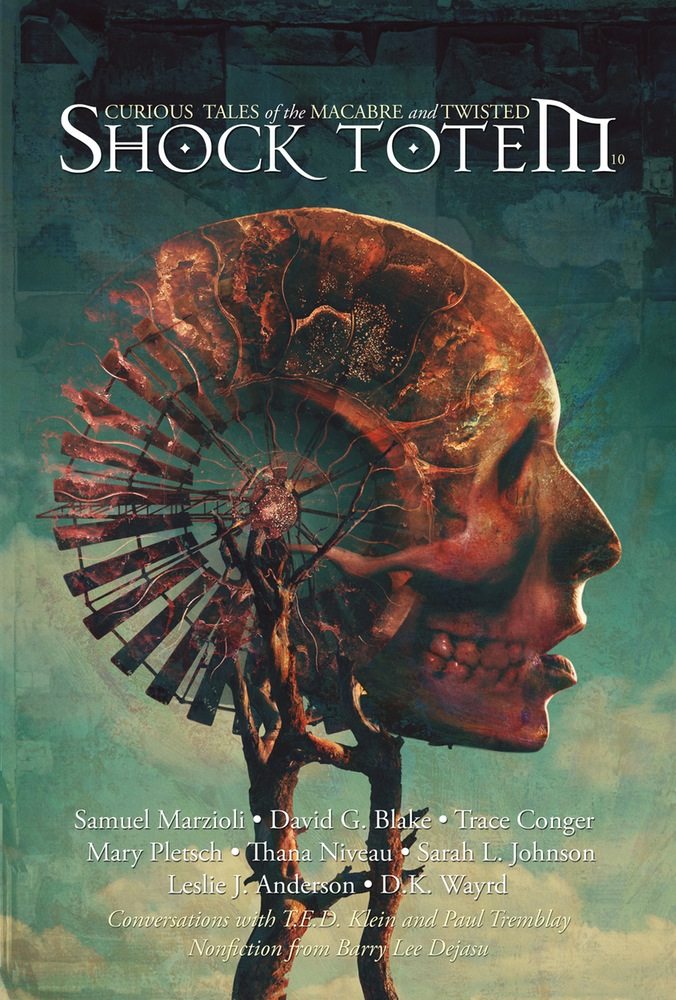 Shock Totem #10, says editor K. Allen Wood, will be for a while the last issue. No—this isn’t The End, but a hiatus. The publishing arm itself, Shock Totem Publications, LLC., will continue its line of novels and novellas. Luckily for us, #10 is packed to the rafters with strong fiction from Trace Conger (“Three Years Ago This May”), Margaret Killjoy (“Malediction”), Mary Pletsch (“Sweet William”), Samuel Marzidi (“Winter Fever”) and several others.

The featured author interviews ought to earn this number a place in Horror history: “Post-Modern Pea Soup: A Conversation with Paul Tremblay,” by Catherine Grant; and “Standing Behind the Curtains: A Conversation with T.E.D. Klein,” by Barry Lee Dejasu. Yes—no sleight of hand there. The T.E.D. Klein, legendary author of The Ceremonies, Dark Gods, Reassuring Tales (2006), and former editor of Rod Serling’s The Twilight Zone Magazine. Since moving into other editorial work, Klein has assumed in many minds a Thomas Pynchon-like obscurity. Even dated interviews are rare, one of which I conducted myself for The Horror Show magazine (Fall 1986). Better known is Douglas Winter’s in his essential Faces of Fear (1985). Anyone curious about Klein can thank Barry Lee Dejasu for tracking down (hopefully without physical coercion) the man, and getting him to talk. Trust me—you will not be disappointed, nor left with lingering questions.

Grant’s interview with Paul Tremblay (A Head Full of Ghosts, and new novel Disappearance at Devil’s Rock) is of equal depth and integrity—outstanding work exploring Tremblay’s writing, and what charges its disturbing, deliciously nuanced themes, narratives, and textures.

Insightful book reviews (among them Valancourt Books’ reissue of Burnt Offerings—Robert Marasco’s marrow-chilling classic) from John Boden and Dejasu, as well as “Howling Through the Keyhole: The Stories Behind the Stories” enhance the already brimming contents page. Mikio Murakami’s evocative cover art is reliably nightmarish and melancholy.