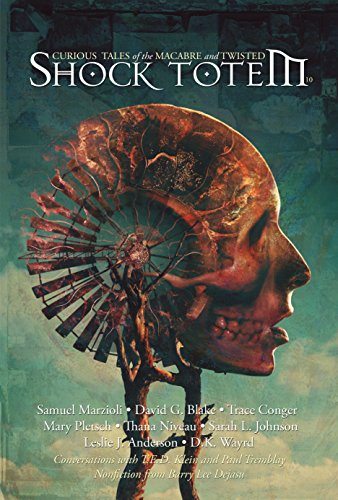 This is a review of what might be the last issue of Shock Totem. The main reason for this is the bane of all creatives: real life. Sometimes all the shit we have to do really gets in the way! Kindly let me add that this is not entirely bad since one of the things taking up the editor’s time is raising children. I salute a person who has their priorities straight and look forward to the time when there will be more new issues of Shock Totem.

And what an issue to go out on — this magazine is HUGE! It is also just chock full of nuts…er, stuff. Not only does it contain a ton of killer fiction, there is nonfiction, poetry (“Deer Born” by Leslie J. Anderson is great and reminds me a little of Joyce Carol Oates), and reviews of books and music. Although the majority of material is horror, there is also some sci-fi, interviews with notable writers, and a cool piece by Barry Lee Dejasu about a real haunted mansion that was on the campus of a college he attended in Southern Vermont. The music section leans in horror correct directions and includes pieces on bands like Korn (why, yes, I am a fan!), and black metal.

The stories in Shock Totem demand to be read with all your attention; each one shows a different facet of fear. Shock Totem will keep you turning those pages until the witching hour. All the stories are great, but a couple real grabbers for me were:

“Winter Fever” by Sam Marzioli put me right there with the main character, Nick, as he goes into a delusional fever in the middle of a huge snowstorm. Something comes to visit and it is a bad thing. His mother always warned Nick about the Darkness that would get him if he misbehaved. Well here it is, in the form of a little girl. As time with his companion drags on, Nick wonders what the hell is happening, but he’s too out of it to do anything. When he finally regains his senses, the level of evil in the house is dangerously high and Nick has to take action quickly to escape before the darkness gets him. But, did he make the right choice?

“Three Years Ago This May” by Trace Conger is a short, powerful story about being rendered semi-useless by disabilities that were caused by someone else’s major fuck up. Fred loses his legs in a car accident caused by a young kid with a lead foot who manages to walk away with a couple scratches. The story is narrated by Fred’s wife, who does her best to help out. But, as someone who is going down a very similar road, I know that all the “sorry’s” and, “I love you’s” in the whole world don’t make a damn bit of difference. Fred could go hiking, but now he’s stuck in wheelchair that he rolls down to the edge of the lake. Every morning, he hauls himself into a canoe that he takes out with the purpose of drowning. Meanwhile his wife waits on the porch of their cabin with the barrel of a gun in her mouth. If Fred comes back for breakfast, she puts the gun away and rattles the pots and pans. Life can kick your ass real bad. Pain and fear are its henchmen.

I really encourage everyone to check out Shock Totem 10, as well as back issues of this really awesome magazine which is available in both digital and paper formats. You will enjoy it! But be careful, because this thing’s got TEETH.