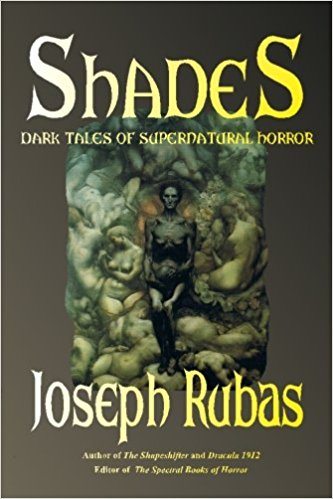 This an excellent book by an author who surprised me in a positive way. Joseph Rubas’ writing reads like that of an older, more seasoned professional even though he is pretty young guy. It feels a little like he is channeling the writers of the old horror pulps in the 22 stories that make up Shades. Think of a young Richard Matheson and early episodes of The Twilight Zone and you’ll have the vibe. Good stuff!

Things kick off with the, it-could-happen-to-you horror of “Passing the Buck.” A pleasant young woman is waiting for a friend at the mall when her life changes horribly and very finally. All because she tried to help. Anybody asks you to help them put a box in their car, you tell ’em to take a hike! Another cool and classic story is “The Warlock.” Some teenagers think they’re smart when they intentionally burn down the house of the local warlock, Kenyard Mays. “Ha-ha! We’ll show that creepy old man who’s boss in this town!” is what these stupid lads think, but they just screwed with the wrong guy. See, even though the burned up body of Mays is found in the leveled home, he’s not in it, thanks to his book of evil magic spells that allow him to shapeshift and switch bodies at will. Soon all the kids who “killed” Mays die horrible deaths, as do their parents and siblings. A local sheriff tries to shut the warlock down by destroying his spell book, but it’s way too late for that. As the story ends, we see that Keynard Mays’ reign of terror is just beginning.

Unlike many collections, Shades is really a different experience and a different kind of horror with each tale. Some people prefer to read books that are just zombie stories, or just vampires, or serial killers. That’s cool, everyone should read what they like. I like variety and the feeling that you’re not even reading the same book by the same author anymore. Joseph Rubas gives us that. From “AOKIGAHARA,” which is about a ghost forest in Tokyo, Japan that is full of the corpses of people who committed suicide, to “The Lake House,” a house rented by a writer in the New England area of the good old U.S.A. What is supposed to be a peaceful retreat turns into a nightmare! Well, the two locations do share one thing. They both want you dead so that they can consume you and absorb you into their very structure.

A few of the pieces are only a page long. “CHOMO” is one of these short shorts, but it still packs a punch. I sure hope that all child molesters DO go to the kind of Hell that Rubas shows us!

All in all, this is a cool read that is available in both trade paperback or as an e-book, and I highly encourage you to pick up a copy today! Shades – Dark Tales of Supernatural Horror can be read in short bites or you can binge out and read it cover to cover, just don’t miss out!