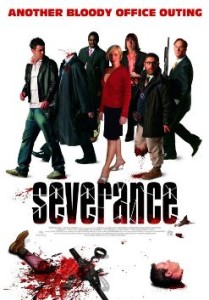 This is the second film from British director Christopher Smith I’m putting under the microscope (the first being CREEP only two short reviews ago). A film that followed immediately after that title in the director’s pantheon, this is Mr. Smith shifting gear from ‘the denizens of the underground tube-world’ to a more sophisticated outdoors romp with comedic stylings. That’s not to say blood isn’t on the menu (on the contrary it’s delivered in buckets), but Severance is black comedy territory interspersed with some truly unnerving horror in the film’s final stages.

In the forests of Hungary, the sales division for a military arms corporation are travelling on a bus through twisting mountainous terrain. Boarded by a motley crew of disparate English workers (and one American), their destination is a luxury retreat in the wilds to participate in team building exercises. Right off the cuff, we know we’re in black comedy country by the cast alone. There’s Gordon (mildly overweight and bumbling, reminiscent of Nick Frost’s character from Shaun of the Dead); there’s Steve (a young everyman who has a penchant for magic mushrooms); beautiful Maggie (the American), Jill (full of punch lines); and rounding off the ensemble are Billy, Harris, and Richard the Manager. When their bus encounters a tree that blocks access to the road, the driver soon abandons ship, leaving the group completely isolated and in charge of locating the retreat solo … which they soon do.
The Lodge (old and decrepit), contains documents alluding to its past history: a mental asylum – or perhaps a re-education centre for Russian war criminals. Though the true history is never agreed upon, one thing is for certain … a fresh pie found in the kitchen containing a human tooth is evidence enough they are not alone. When Jill spots a sinister intruder loitering in the bushes later that night, all agree that abandoning the Lodge would be a wise course of action … though not before a game of paintball to ensure that at least some team-building activity takes place. What soon follows is carnage, and lots of it, as the group is slowly picked off one at a time by a cabal of bloodthirsty maniacs.

Despite a somewhat meandering middle-act, this is an intelligent script that balances the precarious juggling act of suspense and humor perfectly. Though Severance is certainly a vehicle for the ‘slasher’ sub-genre, there are just enough amiable twists involved for that particular title to seem somewhat ill-fitting. While gore-hounds will get their subtle fill (decapitations, bear-traps, and torture sequences) there is also a modicum of ‘heart’ facilitated by a gifted cast who seldom put a foot wrong. Also noteworthy are practical special effects, producing a gritty and stylish element to proceedings that complement the European locale.
Still relatively unknown in some horror circles, Severance is a ride that without question deserves to be mentioned in the same breath as Dog Soldiers, Shaun of the Dead, and The Descent.