Secret Zombie History of the World Coming in December 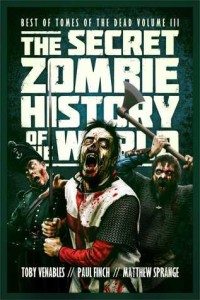 Ok, you know by now that I love zombies.  I love everything about them.  I love the movies and I love the TV shows.  I have to admit that I haven’t read too many zombie books, but that’s about to change.  Why, you ask.  Because my second love is history. So when you combine zombies and history…well, let’s just say I’m intrigued.  Read on.

The Secret Zombie History of the World

Northern Europe, 976 AD: a Viking crew find themselves in a bleak land of pestilence, where the dead return as draugr to feed on the flesh of their kin and a dark castle in a hidden fjord hides a terrible secret.

Britain, 1295 AD: A young English knight joins a force sent to capture a castle from Welsh rebels, but druids summon an army of the undead, bent on revenge. Will the stronghold – once thought impregnable – hold out?

The Cape of Good Hope, the 1820s: Captain Havelock discovers his ship and the French frigate he has been ordered to hunt down are not alone as an enemy thought long since vanquished rises from the deeps…

This is The Secret Zombie History of the World – an omnibus of historical zombie stories, released in this new format for the North American market, that reveals the outbreaks that have plagued mankind for hundreds of years. From Viking ‘draugr’ to the medieval undead and Napoleonic corpses, this trio of tales from the popular Tomes of the Dead series will keep you awake at night wondering just how close humanity has come to joining the hordes of the infected!

Rotten bone and raddled flesh, shuffling perils and moaning menaces – Tomes of the Dead re-imagines the zombie genre not as an endless retread of the same tired themes, but as a prism crack’d, exploring the gut-churning, flesh-biting world of the shambling dead from new, different and unexpected directions!