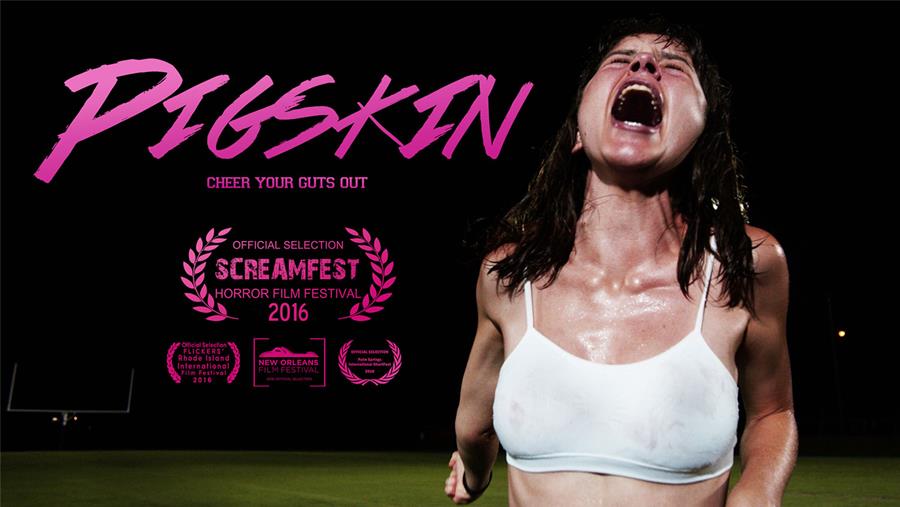 Pigskin, a colorful 80’s horror throwback with a relevant, socially conscious message, will be screening at Screamfest, Hollywood’s premier film festival, this Saturday, October 22nd at 12:00pm at the Chinese Theatre. Creative duo Jake Hammond (Director/Co-Writer) and Nicola Newton (Cinematographer/Co-Writer) will be in attendance with their team for a Q&A.
For tickets, visit:
https://screamfestla.com/tickets/pigskin
The film that American horror reference blog We Are Indie Horror calls “a gorgeous homage to the nostalgia of 80’s teen sexuality set to the tone of a body conscious 21st century feminism” has recently begun its festival circuit, winning 13 awards and playing at 20+ festivals including the New Orleans Film Festival, FLICKERS Rhode Island International Vortex Sci-Fi, Fantasy & Horror Film Festival, and the Oscar® qualifying Palm Springs International ShortFest. Entertainment site Bloody Disgusting called it an “award winner that is no shock whatsoever”.
Pigskin centers on a high school cheerleader who accepts a date with the quarterback and is subsequently plagued by a nightmarish manifestation of her own bodily insecurities.
From Jake Hammond (Director/Co-Writer) and Nicola Newton (Cinematographer/Co-Writer), the film is a Florida State University thesis project – the same school that gave us David Robert Mitchell of It Follows and Wes Ball of the Maze Runner series.
The film spawned from a yearning to create something that paid homage to “high school horror films” like Halloween and Carrie, and a desire to incorporate a genuine story of a subject that both filmmakers feel passionately about. Pigskin takes the idea of body image, something that’s so universally personal, especially for young women, and transforms it into a living nightmare.
“Everything within Pigskin comes from deeply personal experiences and insecurities. Turning these feelings into a film that can be shared and discussed is a way to force a voice from these insecurities, of which it is hard to talk about unfiltered. Nicola and I feel passionately about the issues we’re exploring and, in the same way the making of the film has given me confidence of my own, we hope that it has the ability to touch people who may feel similarly,” says director and co-writer Jake Hammond.
The filmmakers are looking for an online distribution platform, for release this spring, that would get the short lots of exposure and generate interest that could promote the eventual making of a feature adaptation (which is currently being outlined).
Starring Isadora Leiva as Laurie and Pablo Gonzalez as Glenn, Pigskin is co-written and directed by Jake Hammond, cinematographed and co-written by Nicola Newton, and produced by Paula Andrea Gonzalez. Editing and production design by Aleksandra Hansen, Score by Charles Spears, with music from Chromatics and Desire.
To find out more about Pigskin and a list of awards and upcoming screenings, please check the official website www.PigskinShortFilm.com.
You can also follow us on social media:
Twitter: @PigskinFilm
Facebook: facebook.com/PigskinShortFilm