Scream Factory is Looking for Your Horror Short Film 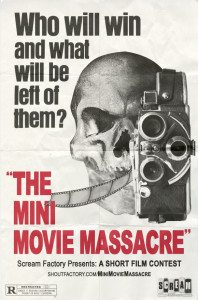 If you are looking to break into the horror film business, I can’t think of a better way to do it.  Scream Factory is a well known name in the business, and now they’re looking for submissions.  You’d be crazy not to give this a try.

There will be two award categories:

Audience Award – Viewers will be able to cast their votes in the form of YouTube video likes, indicating their favorite submissions.  The votes will be tallied on Monday, December 2, 2013 at 9:00 AM PST, and the video with the most likes will be declared the winner.

Judges Pick Award – Video content is reviewed by a selected panel of Scream Factory judges and then one is voted on as their favorite.

Winners of each will be announced on December 2, 2013 via Scream Factory’s official website and social media channels. The Audience Award and The Judges Pick Award Grand Prize Winners will both receive a $250.00 Scream Factory catalog shopping spree.

For more info on submission criteria and deadlines, go to their official site.

In the meantime, I’ve included their trailer for this event.