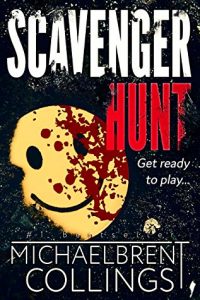 Michaelbrent Collings has written a number of books in which a group of strangers who don’t know each are thrust into terrible circumstances by outside forces and then must struggle to survive. He’s back with a fresh take on this premise in Scavenger Hunt.

Here, five people—Solomon, a reformed gangbanger; Chong, an ill-tempered man of mystery; Elena, director of an orphanage; Nicole, a young hooker; and Clint, a down-on-his-luck guy with a missing sister he still mourns—are torn out of their ordinary lives and wake up in a warehouse wearing collars and watches they can’t remove. The collars are straight out of Suicide Squad and will be remotely triggered to explode if their wearers don’t do precisely what their captor—a freaky dude in a mask who calls himself Mr. Do-Good—wants. The watches are smart watches that allow Mr. Do-Good to issue orders. And boy, does he have some strange orders for them. They are sent across town to some shady neighbourhoods to perform tasks that don’t initially make much sense. It rapidly becomes apparent, however, that each of Do-Good’s tasks helps reveal a new piece of the puzzle that explains why they find themselves in the predicament they do. Assuming they complete all of Do-Good’s tasks on time and without disobeying his orders, they will be released. But we all know that a guy like Mr. Do-Good isn’t going to make it easy on them.

As it turns out, of course, each of these five people is not quite so ordinary as they might initially appear, and unsurprisingly, their pasts are linked in key ways. Most of them also aren’t quite as innocent as they might have appeared at first, but I don’t want to spoil the plot in significant ways, because this is first and foremost a horror novel that revolves around a dark secret in everyone’s past. There are small clues scattered throughout the novel about the identity of Mr. Do-Good and the reasons why these five people have been chosen.

Obviously, a story like this depends on the characters involved. Collings’ characterization of ordinary people—especially ones with a secret in their past—is used to good effect here. We come to know each of the characters well through the course of the novel, diving deep into their backstories and learning why they ended up in the worst situation of their lives. These backstories are really the heart of the novel and where we see the characters’ true depths (and the depths to which at least some of them have sunk in the past).

Comparisons with the Saw film franchise are probably unavoidable, given that in Scavenger Hunt a villainous mastermind has kidnapped a bunch of strangers and placed them in a difficult bind where they must decide between suboptimal choices, but the superficial comparison ends there—this is not an example of torture porn. I won’t give away any of the plot twists here, that’s really the fun part of the novel, but I will say that I very much enjoyed the novel’s resolution. About halfway through, I thought I knew where things were headed; I was partly right about how all of these people were connected, but didn’t anticipate all the twists and turns. A good story with great pacing and a satisfying resolution. Definitely recommended.