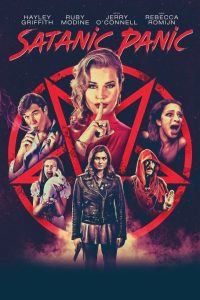 Sometimes Hollywood moves in cycles. Take Armageddon and Deep Impact, Volcano, Dante’s Peak, and so on. But where some of them seem to be in a race to outdo the other, and some can accurately be called ripoffs, I do not think this is the case this time. I mention all this because another film with a similar central theme of “rich people be weird and into some very dark stuff” just came out, and because it came to theaters and was released a few weeks before this one, I can see people saying “Oh, Satanic Panic is a ripoff of Ready or Not.” And no, it is very much not. It just had the bad luck of coming out shortly after the other movie, but it has its one take on the subject, its own style and its own voice. It is very much a different watch than Ready or Not, but is it worth a watch? That is the question I am here today to talk about.

Set in the awesome 80s, when this title would make the most sense, a down-on-her-luck pizza delivery girl takes an out-of-the -way delivery to a swanky neighborhood, hoping for a big tip. What she discovers, instead, is the little secret that all the rich folks in this neighborhood actively worship the devil. Furthermore, because the pizza girl is a “good girl” she is a virgin, and wouldn’t you just know it: the cult happens to be one virgin short for their super special Satanic sacrificial night. And thus hilarity ensues.

Now usually when I say something like “hilarity ensues,” I’m being kind of snarky and making fun of the fact that a comedy film isn’t all that funny. However, that is not the case here, as I found Satanic Panic to be, well, hilarious most of the time. It is a horror comedy, that never tries to be truly scary, even if it mimics some of the tropes of famous fright flicks fantastically. It makes up for that in doubling down on the funny and truly succeeding at landing laughs more often than not. Sure it goes over-the-top at times, but with such an over-the-top title as Satanic Panic, how could it not go there?

All the actors turn in fine performances here, even if some (Jerry O’Connell) have, what amounts to extended cameos. Rebecca Romijn surprised me with how good she is as the wicked, and wickedly funny, leader of the Satanists, and her bickering with actress Arden Myrin as a rival for her top spot in the cult was especially great. The two young leads, Hayley Griffith as the aforementioned pizza girl and Ruby Modine as a world- (or devil?) weary daughter of the cult looking for greener pastures, were both wonderful in this. They nailed the feel of their characters and delivered on the funny time and time again. As for director Chelsea Stardust, this was her fist feature film but I hope it will not be her last. She pulled it off well and I am very interested in seeing what she does next.

Satanic Panic was a weird, wild ride and I loved it. It’s on various streaming services now and soon will be on disc. However you can get to watch this film, I highly recommend that you do so. For a little movie I had not heard of before, it took me by surprise in a big, fun way. Consider it recommended.