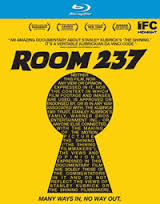 Documentaries on horror movies are a hot thing these days. Pretty much if you can name a fright flick, someone has done a doc about that film or series. From the big boys like Psycho, Jaws, and Friday the 13th to the more obscure fan favorites like Return of the Living Dead, to the out and out cult films like Troll 2. So it was only a matter of time before someone tackled a lofty and legendary horror movie like Stanley Kubrick’s The Shining. Room 237 is that documentary, but possibly like the film it is about, it is more than what you think it is.

Most documentaries like this will interview the cast and crew of their subject film. They will discuss the good and bad times everyone had while making the movie, they may give you some behind the scenes info on what might have been or almost was, they might even dish some dirt on who or what caused the most problems during the production. Room 237 does none of that. It is not about making The Shining, it’s about the movie itself and all the hidden messages that director Stanly Kubrick purposely put into his film. And buddy, according to this movie, there are a lot of them.

According to one person, The Shining is all about the Jewish Holocaust. Another person thinks it’s all about the plight of the Native Americans. Someone else thinks it’s all about the Minotaur. Yes, the Greek myth about the guy with a bull’s head. But perhaps the most well-known theory of what The Shining is “really about” is still the most intriguing, and that’s the one where it is all a carefully constructed confession of how Kubrick was hired by NASA to fake the Apollo moon landing. According to several people, The Shining is just full of nods and winks to that, from the obvious like young Danny’s Apollo sweater, to the obscure, like the real meaning of the infamous room 237.

This Room 237 is a fun watch and an exploration of obsession and how it can color perception. Because even if you buy one of the theories this movie points out, that still leaves six or seven other theories unaccounted for. While it is possible Kubrick was working some hidden message into this film, it is all but impossible to think that he was working so many vastly different ones into the same film. And yet, so many people swear that their pet theory is the right one. So obviously some people must be wrong, and yet they are so sure. It is that exploration of different viewpoints where this documentary really…wait for it…shines.

As for the new Blu-ray from IFC Midnight, it contains a nice selection of extras and special features. There is a commentary track with Kevin McLeod, an expert of Kubrick and one of the chief believers in the various conspiracy theories. There is a panel discussion from the first annual Stanly Film Festival called “Secrets of The Shining” that runs 50 minutes that discusses all aspects of the movie. There are 11 deleted scenes from the doc that all together run nearly a half hour. There is a short 3 minute featurette about making the music for Room 237. There is a 3 minute interview with mondo poster artist Alred Lewis about the alternate poster he created for the documentary. A collection of trailers bring the extras to a close.

If you are a movie buff, a filmmaker, or just a fan of The Shining (and how can you call yourself a lover of anything horror and not be?) then you will get a kick out of this movie. If you are a conspiracy theorists, then you will out and out love this documentary. For everyone else, it is an interesting look at obsession and how it can color people’s thoughts until they are seeing patterns in everything. It is a unique documentary if nothing less, and even if you don’t believe in any of the hidden messages this film reportedly uncovers, it is always interesting. So for all those reasons I can easily recommend Room 237.