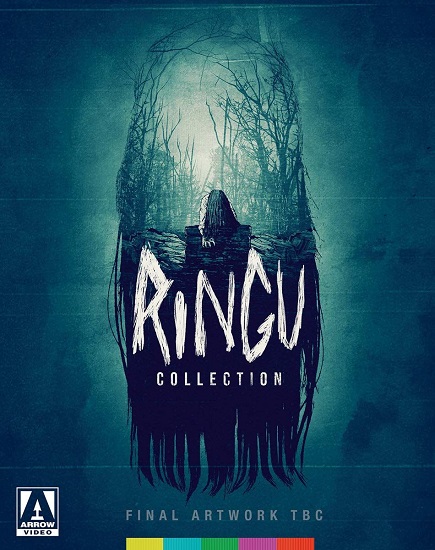 Ringu, the movie that started the J-horror invasion of America. The movie you had to see if you were a horror fan at the end of the 90s. The film that has been homaged, ripped-off, remade, and parodied countless times. Yes, this movie is a giant, and rightly so, so I am happy to see it get the deluxe big box collector’s treatment from the always awesome Arrow Video. And along with the original, Japanese horror classic, they have included part 2 and the prequel, part 0, in one beautiful box set. But is all that worth a get? Well, dust off your old VHS player, don’t answer the phone, and let’s find out.

Starting with the first film, Ringu, and come on, you know the story: there is a haunted VHS tape, you watch a weird arthouse film on it, then someone calls you on the telephone and tells you that you’ll be dead in seven days. Simple, right? But oh, so effective. Everything about this movie drips with atmosphere, skill, and style, and there is a reason it is a modern-day classic and caused everyone outside of Japan to take notice of Japanese horror (AKA: J-Horror) movies. I love this movie a lot and if you have never seen it then you’re depriving yourself of something good.

Ringu 2 is more of the same, but what did you expect? It is a sequel and one directed by the same guy as the first and written by the same man who wrote the first one’s screenplay, Hiroshi Takahashi. It also came out just one year after the first movie became a huge success, so I don’t want to say that things were rushed on this, but yeah, things were rushed on this. That said, while it doesn’t do anything all that new, it is still a fine, spooky, enjoyable film. Is it a mandatory watch? No, but if you liked Ringu then here is some more drippy-ghost-girl-with-hair-in-her-face action for you.

And then another year later the next movie came out. This one wasn’t a sequel but a prequel, and aptly named Ringu 0. The problem is that I’m usually not a fan of prequels in general and prequel horror movies even more so. Things usually come off as very unnecessary and pointless, and there is some of that here in this story of a young Sadako looking to become an actress and not a vengeful girl-in-a-well ghost. While the screenwriter remains the same, director duties falls to someone new, so Hideo Nakata‘s style is missing in this. This movie isn’t all that bad, and some enjoyment can be had here, but it is the weakest of the trilogy.

Let’s get to the extras that Arrow Video put on these discs for this collection. Things starts off nice with a thick, 58-page color collector’s booklet. Then Ringu has an audio commentary with film historian and J-horror expert David Kalat, and I found this to be very entertaining and informative. There is a featurette on the legacy of Ringu, an interview with author and critic Kat Ellinger about the movie, another one with another author, Alexandra Heller-Nicholas, about the Ringu series. Sadako’s video is presented here in its entirety, there is a collection of trailers, and finally, an image gallery.

For Ringu 2 things start off with a free movie! Yes, in addition to Ringu 2, there is the first “forgotten” sequel to Ringu called Rasen, or The Spiral. So that is an awesome extra. There is also a featurette about the psychology of fear, and a collection of trailers.

As for Ringu 0, author Alexandra Heller-Nicholas returns to provide an audio commentary, author Jasper Sharp talks about the J-horror phenomenon on a featurette, and there is a behind-the-scenes featurette as well. Then there is a collection of deleted scenes, and a couple of trailers.

This collection of Ringu films is a must for fans of Asian horror, ghost stories, and good spooky cinema in general. And if you are a fan of the Ringu movies, then this new box set from Arrow Video is the way to watch them. It is a great collection with a bunch of goodies, and I can highly recommend it. Pick up your copy when it comes out October 29th.