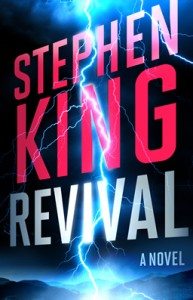 As any King fan knows, the man’s work switches from the mainstream (Rita Hayworth and the Shawshank Redemption,The Girl Who Loved Tom Gordon) to the deliberately horrific (Carrie, Pet Semetary, Cujo). While Revival veers more towards the former with its subtle depictions of madness and underlying fears, the overall impact will no doubt illicit a horrific response that should resonate down your spine until it rattles the entire believe system of whichever existential foundation you subscribe to.

For Jamie Morton, the most important question he had ever asked himself was: who is Pastor Danny?  Ever since the young pastor had strolled into town and cast his shadow over six year old Jamie the two became inseparable.  During the worst times of his life Jamie and the former pastor were drawn together as two counterparts of a single universe. Jamie first realized he had met someone special, albeit unorthodox, when the young pastor had demonstrated his newest invention by bringing back his brother’s voice after a tragic ski pole accident. Then, when a most horrific tragedy later pierces the heart of the young parish leader, the fallen pastor redefines not only his believe system, but his entire existence and life purpose that put him on a mission that had nothing to do with God. Jamie thought he had seen the last of the pastor as he watched him drive out of town, exiled for turning his back on the small town believers. Fast forward several years later and the two cross paths again, one a local rock star turned junkie, the other a pastor turned carnival illusionist turned evangelist. Like it or not, their business together had only just begun.

As Jamie’s life progresses, he finds himself weaving in and out of Pastor Danny’s path as if it were his own. Despite all odds, crossroads and sub-plots in between, there can be no escaping the finale of their final destination together, whatever it may be. As Danny’s miracle cures spread across the country, it becomes fatally obvious that his gifts are as much a blessing as they are a curse.  The more progress Danny makes towards his life’s work, the closer Jamie gets to realizing his old friend’s secret project could very well lead to forbidden answers best left to the unknown.

While Revival isn’t likely to give cause for keeping your lights on at night, it very well might make you look twice at the world around you, forcing questions of what’s beyond that invisible door, the one covered in dead ivy where Mother whispers from the other side, watching and waiting until your time is due.

My advice? Read it.