Return of the Mothman – Book Review 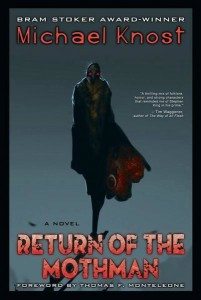 Return of the Mothman

I should preface this review by saying that before reading this, I hadn’t read anything about the Mothman or anything by author Michael Knost. That said, familiarity with the legend isn’t at all required to enjoy Knost’s creepy, character-based take on it.

After a brief prologue that gives a taste of the carnage to come, the novel opens in North Carolina with main character Ted Browning receiving a strange, static-filled phone call. The few words he picks out of the noise seem to suggest that his grandmother needs him. One phone call to his cousin later and he’s packing up and heading back to his hometown of Logan, West Virginia. Upon his arrival, memories of the town and of past relationships begin to haunt him, and before long, he’s thrust into a darkness the likes of which he’s never encountered.

It’s apparent from the first few sentences that Knost’s prose is clean and simple, but deceptively so. He puts in what is necessary, and quickly gets to the core of the small but colorful cast of sympathetic characters. There are no “good guys” or “bad guys” here. The characters are all well-drawn, and the relationships between them ring true. I appreciate the effort Knost put in here, and found myself rooting for all of them.

The horror, unlike the characters, is at first very undefined. It creeps forth slowly and quietly, weaving its way in through the hearsay of the townsfolk. There’s mention of a figure with black wings and glowing red eyes, sighted particularly in a section of the mine that Ted used to work in (and in which his best friend died). Strange smells, the sound of flapping wings, and more dead-air phone calls add to the subtle and almost tangible sense of menace that pervades the novel.

When the Mothman was fully revealed I found that some of that menace was taken down a few notches. Things are much more unsettling in the parts where the creature is relegated to the shadows and the lowered voices of the people who claim to have witnessed it. The momentum picks up quite rapidly in the final act, and I think the novel paradoxically loses some of its steam. I just couldn’t suspend disbelief in some of the later parts. Luckily I was already so invested in the characters that it didn’t bother me as much as it might have.

If you’re a Mothman junkie or if you’re into character-based horror, I’d say give this one a try. Knost is a fine writer and there’s a lot to like here. It’s an understated and effective story about a fascinating urban legend, and a solid introduction to Knost’s writing and the Mothman mythos.