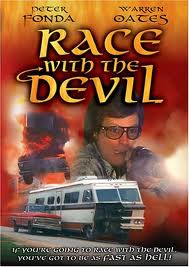 Race with the Devil

This Halloween season we are going to be meeting with the Devil and his minions. In the 1970’s, drive-in theaters were filled with thousands of horror films sporting both big and low budgets. Vampires, werewolves, masked killers, and many other types of monsters terrorized movie goers across the country.

One of the most popular genres of horror during this fruitful decade was devil cults and satanic worship films. The subject was in a few movies during the sixties but really flourished during the 1970’s with a new Devil themed film coming out at a rate of two or three times a month.

The best one of them all was the 1975 grindhouse/horror masterpiece Race with the Devil. Starring Peter Fonda, Warren Oates, Loretta Swit, and Lara Parker as two vacationing couples in Texas who run afoul of a seemingly endless county of Satan worshipers.

The two couples buy a state of the art (for the seventies!) RV and begin a trek from Texas to Colorado to take a much needed vacation. One night while still in Texas, they stop overnight to get sleep for the long drive ahead. Fonda and Oates sit outside drinking well into the night. In the distance they see a fire and people moving about. They sneak up to get a closer look with their binoculars. At first they think it is a bunch of hippies having an orgy as the women begin to dance around naked. Fonda and Oates are smiling and having fun with what they are seeing. Then, shockingly, one of the naked women is lifted up and one of the masked men drives a knife into her chest killing her. At the same moment, Swit turns on the RV light to yell out to the two men to come to bed. Fonda and Oates try to quiet her but Oates yells a bit too loud. In a terrifying moment, we see the cult leader look their way. They have been seen and from here on the chase and terror begins.

One of the film’s many strengths is in its casting. Peter Fonda and Warren Oates were real life friends who had worked on film together twice before in the Fonda directed western The Hired Hand and the Thomas McGuaine oddity 92 in the Shade. They had a natural rapport and a marvelous on screen chemistry. Here, as two friends who run a race bike shop together, they are seamless in their moments together; the two are with one another in every moment of the film.

Swit and Parker play their wives and give solid performances. They are not just cowering women relying on their husbands to save them. Swit, coming off of television’s M.A.S.H. where she played “Hot Lips” Houlihan, is a perfect match as Warren Oates’s wife and Parker, as Fonda’s bride, is excellent. She had previously earned her horror cred in the TV series Dark Shadows. Here she is a woman who sees something is wrong with every person they come in contact with after the ritual murder.

Even the great western character actor R.G. Armstrong has a fine supporting role as a Sherriff who thinks that maybe the two men were a bit drunk and didn’t really see the murder they claim to have witnessed.

The film plays with its audience in showing us townspeople in various small towns tucked off of the highway. We are constantly wondering who is or isn’t involved, and every moment becomes more sinister as the film progresses. It is a masterful example of paranoia and claustrophobic tensions, as the two couples become prisoners in their RV. Outside the camper there is no safe haven.

The direction is just perfect, giving the film a tight balance of horror and grindhouse car chase action. Jack Starrett was called in at the last minute when the producers fired the previous director, Lee Frost, when the dailies were not what they were looking for. With almost no prep time, Starrett came in and saved the film. He had directed a couple of classic Blaxploitation films earlier in the decade, the Jim Brown actioner Slaughter and the infamous Cleopatra Jones. Both were big hits in the grindhouse world but Starrett had never directed horror. The producers weren’t so much worried about the horror aspects of the film but the car chases and stunts, of which there were many.

The producers, cast, and crew immediately clicked with the director and the shoot was reportedly quick, efficient and fun. Starrett had already made two movies that were full of stunts and he knew that world like the back of his hand. In this film, there are some of the best car chases and crashes ever put on film and considering this movie’s low budget they are all the more impressive.

Most of the terror comes from the close calls the two couples have when they find that nothing is what it seems and they barely escape with their lives from town to town. In this film, nowhere is safe. In every town, restaurant, gas station, and even the lone highways, evil lurks and is ready to devour them.

The film was a monster success on the grindhouse and drive-in circuits but for some reason has been almost forgotten since its release. People who do not already know of the film regard it as just another low budget drive in horror cheapie. It is much more than that and deserves mention when naming Devil worship related films such as Rosemary’s Baby and The Exorcist. In its own grindhouse way, Race with the Devil is as entertaining as those films.

There is now a Blu Ray release that greatly improves on the image giving it a gorgeous 1080P transfer and includes us some nice extras such as an in depth interview with Peter Fonda. I hope the release will bring this great film to a whole new generation of fans.