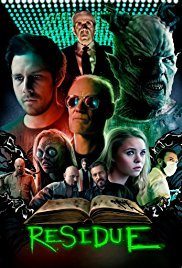 When Residue began, I was sure it was going end with my demanding my ninety, or so, minutes back. I was wrong. It was a bit cheesy and there wasn’t a great deal of money spent on FX and the story was mind-boggling. But I liked it!

This is one of those crazy movies where you wonder what’s really happening and why? It’s all about a book. You’re not supposed to read it, but when you don’t read it, you’re already reading it! I know, right? The craziest part is, it knows you, feeds off of your fears, and slowly plunges you into a darkness you can never escape from. Because you’re around the book, the essence, the residue becomes a sort of vortex that sucks your soul from you.

Residue is a low-budget movie that you want to dislike, but you’re literally swept away! Yes, the FX are so cheesy you shake your head while watching. The acting, though okay, make it feel more comical than horrific. Then the story itself is kooky-creepy, like Creepshow or other 80s spoofs. It’s not one I’ll be adding to my movie collection, but if I was bored on a Friday night and looking for something on one of my movie channels, I’d watch it again!

You’ll just have to check it out for yourself.