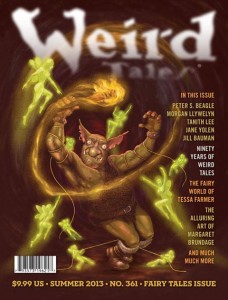 Weird Tales is the place where two storytelling concepts meet: speculative and alternative. In 1923, when the magazine was originally founded, those two ideas amounted to the same thing. Weird Tales was launched to showcase writers trying to publish stories so bizarre and far out, no one else would publish them — stories of unearthly dimensions and dark possibilities, gothic seductresses and cosmic monstrosities. Today, Weird Tales carries that mission forward into the 21st century, finding the most talented new writers, artists, and creators whose visions are too incredible to fit within the comfortable little boxes of everyday experience.

The publisher, (film maker and director) John Harlacher, and editor in chief Marvin Kaye (playwright, author and anthologist) have made an attempt to take the magazine back to its roots. Each new issue has a mixture of Themed and non-themed fiction. The first relaunch issue (#360) had HPL’s “Old Ones” as it theme with original fiction by Brian Lumley, Michael Shea and Darrell Schweitzer among others.

The newest issue has “Fairy Tales” as its theme with fiction by Peter S. Beagle (The Last Unicorn) and Tanith Lee, and non-fiction by Darrell Schweitzer.