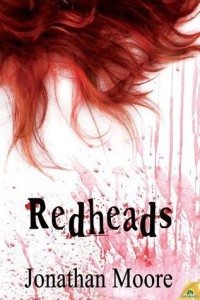 Redheads is a bit of a quirky novel, fascinating and engaging but not quite—for me, at least—complete.

The plot is direct enough: someone is killing…make that slaughtering women, quite literally, since in every case the killer takes the time to consume some portion of the body. The slayings are horrific and bloody; they all occur within a few miles of an ocean; and they have been going on for decades.

And the victims are all redheads.

Chris Wilcox is the husband of one of the victims who, through a number of circumstances all believable presented, is independently wealthy and had both the time and the money to devote himself to tracking the killer. This entails traveling across the globe to visit the scenes of the crimes, collecting all of the data he can on what happened to each of the women, and gathering a small group of skilled associates to help him…all of whom have suffered losses to the killer.

Working together in what is essentially a procedural novel, Chris and his cohorts uncover more and more information about the killer and, somewhere around the middle of the novel, make a starling and ultimately (for several of them) a fatal discovery: the killer is not human.

From that point, the meticulously developed trains of evidence lead Chris and the others deeper and deeper into a gigantic web of deceit and disguise, into the heart of a secret so devastating that even to know of it leads to death. And, eventually, it leads to the killer himself/itself.

And that is where the novel does not deliver quite enough. Everything leading up to the final disclosures is so well handled, so complete in detail, so convincing in narration, that the climax seems underwritten. The anomalous fact that the victims were redheads is explained, but perhaps too superficially; and, more critically, the nature of the killer is itself left vague.

Still, the novel is tight, well-written, and shows a new writer off to a promising beginning. While Redheads will not rank among my favorites, I look forward to reading more of Moore’s tales.