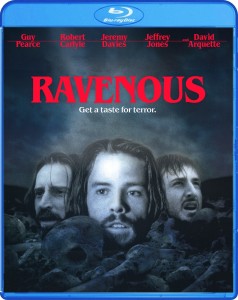 I love stories about the Native American boogieman known as the Wendigo. Sadly, while that mythical monster’s notoriety has been on the rise the last few decades, there are still not enough tales about that cold-hearted man-eater for my taste. Ha. However Ravenous, made in 1999, is one of the best and quirkiest flicks to ever tackle the topic. What, you never heard of it? I’m not surprised. While it has a strong cult following for years, a cult I consider myself a member of, it has been largely overlooked or forgotten by many horror fans. Thankfully the always excellent Scream Factory has released this on Blu-ray for the first time. Is it a glorious feast to be gobbled up, or is the disc all skin and bones and not worth chewing on? Well grab a bib, bring your appetite, and let’s do lunch with Ravenous.
Staring Guy Pearce, still fresh from his career-making performance in L.A. Confidential, as an army officer who, during the Mexican-American war, gets a taste of something forbidden. Something that empowers him, but leaves him changed and haunted. This commanding officer, not liking his performance in the field, decided to send him off to a remote outpost in the wilds of northern and mountainous California. There he meets a handful of colorful characters who all seem to be members of the U.S. Army’s shameful secrets society. Then one night a stranger stumbles into the fort, near frozen and with a terrifying tale of murder and cannibalism to tell. The resident Native American guide recognizes the signs of a Wendigo when he see them, but that doesn’t stop the soldiers from running off into the wildness to save a woman from the inhuman appetite of a man-eater. As you could guess, things are not exactly what they seem, and soon there’s going to be humanary stew (to quote Mr. Cooper) all over the place, but with much fewer soldiers to enjoy the feast.

Now there have been many movies about cannibals, but there are several elements that set Ravenous apart from the rest of the hungry hoard. First, the direction and acting is all top notch, with Robert Carlyle as the sublime standout of the cast, but honestly, not a single actor doesn’t deliver the goods in this movie. That surprisingly includes David Arquette as a giggling stoner. Usually the idea of Arquette acting trippy and out of it (you know, pretty much how he always acts) is enough to set my teeth on edge, but here it actually works. The story is solid and well-written. Not only does it add the supernatural element with my much-loved Wendigo, but it is a well-blended mix of gory horror and back as pitch humor. Last, but in no way least, there is the amazing and unique soundtrack by Damon Albarn. If you’ve ever heard it, then you’ll never forget it, and I know you’ve heard it somewhere, if not in this movie, as it has been sampled in countless commercials and trailers for other films since it first came out. It is wonderfully strange, beautifully surreal, and fiercely original.

So, are you stuffed yet? Well I hope you left room for dessert, as the new Blu-ray from Scream Factory comes packed with some tasty extras. First off, there are three commentary tracks here. One is with director Antonia Bird and composer Damon Albarn. Another is with screenwriter Ted Griffin and actor Jeffrey Jones. The third is a solo one with actor and real star of the show, Robert Carlyle. There is also a weird audio track that plays only the music and sound effects from the film. Yep, all the dialog has been removed. Why? Who knows, but it is kind of cool. Not enough for you? Well there is a 20 minuet interview with Jeffrey Jones, a collection of deleted scenes, those same deleted scenes with a commentary track, theatrical trailer, TV spot, and a photo gallery.

Ravenous is a strange, original, and awesome film. It’s one of my favorites and it looks amazing on this new Blu-ray. If you are in the mood for something different, give it a try and see if it’s up to your taste. Me, I love it a lot, and I always want more of it. Consider it very highly recommended.