In our constant search for new books that you’d be interested in, we came up with Poe: Nevermore by Rachel Martens.  You can find it on Amazon, so head on over and give it a try. 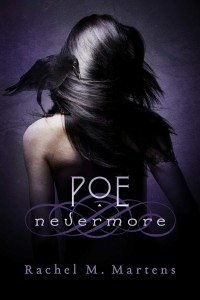 “Poe: Nevermore” is an Edgar Allan Poe-inspired thriller in which a young woman must race against time and death to save those she loves while struggling with depression, a new relationship complicated by her past, and an abusive former foster-father.

“Nevermore,” the first in a six-book series, is told by Elenora Allison Poe, or “Poe” for short.  Poe is twenty-four years old, drowning in debt and depression, and very alone, having been orphaned at the age of two and raised in an unloving household. Suffering from insomnia and PTSD from a traumatic experience seven years before, Poe keeps everyone at arm’s length. Then, she meets homicide detective Caleb Frost and her life changes dramatically. Frost sees Poe’s brokenness in perfect clarity and sympathizes with her. However, just when Poe is starting to let him in, she discovers a horrible truth: she is the sole direct descendant of Edgar Allan Poe, inheriting not only the last name of one of the world’s most famous poets, but also a terrible family curse that takes the form of Edgar Allan Poe’s most haunting tales. If Poe cannot recognize the curse unfolding in time, it will destroy the lives of all those close to her and annihilate her sanity.