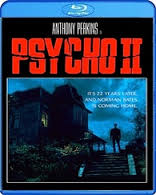 So 23 years after one of the most influential movies ever made came out, how the hell do you make a sequel to it? This is how, but was the end result any good? Well come on, we’ve got some motel reservations waiting for us, just make sure you take a shower before we leave.

Psycho II starts with everyone’s favorite momma’s boy, Norman Bates, getting released from the asylum after being pronounced sane. Naturally not everyone is happy with that news, like Lila Loomis, the sister of the woman who helped make thousands of people afraid to take a shower. But despite her objections, Norman is let loose and so he returns home to the motel and his infamous house on the hill. There he tries his best to be the model of a sane citizen. He gets a job at the local dinner and even convinces a cute young girl to come live with him. Yeah, who knew Norman was such a player? But then mother shows up and starts to ruin everything. No really, Norman starts to find notes from his mommy all over the house and even at his work. If that wasn’t cuckoo for Cocoa Puffs enough, he even begins getting phone calls from his mummified mommy. I wonder if she calls collect? Then there is the mysterious figure in the old lady dress slicing up anyone and everyone within a 10 mile radius of the Bates Motel. Is the ghoulish granny Norman once again going psycho (title plug), or is there something else happening? Could there be a stranger’s hand holding the butcher knife this time, and if so, who?

That question is at the heart of this movie’s story. It’s a mystery and a pretty good one too. It is suitably twisty with a bit of a shock at the end that while it stretches some suspension of disbelief, it doesn’t outright break it. That said, what makes this film really stand out is the performance of the star, Anthony Perkins. Even more so than in the original film that put him on the map, Mr. Perkins gives a wonderfully sympathetic performance of a man trying so hard to do what’s right, and fearing that his newfound sanity is slipping, slipping, slipping away. He does the impossible and makes you feel sorry for a character that right from the start you know is a multiple murderer. Someone that is most likely killing again. People often point to Anthony Soprano, Dexter Morgan, and Walter White as great characters that you know are bad guys but you can’t help but root for anyway as some sort of new thing. When that happens I point to Norman Bates in Psycho II that was made back in 1983 and just smile.

So Psycho II is a pretty darn good movie, but what’s the new Blu-ray from Scream Factory like? Well, it’s pretty darn good too. There is an audio commentary with writer Tom Holland. There is a neat sort of audio commentary that has snippets and interviews from many of the cast and crew talking about the movie. This way you can get insight from people who are no longer here, like director Richard Franklin and star Anthony Perkins. A similar bit of throwback fun is a cast and crew interview segment that looks like it came right off a 1980s VHS tape, which is when it was no doubt shot. It runs 35 minutes and was more of a press release thing, but it was a fun watch for some retro fun. Trailers, TV spots and a still gallery can also be found here.

Psycho II is not as good as the original, but then it never could be. There is only on Psycho, and yes that includes that dreadful 1998 remake. Sorry Gus Van Sant, that’s just a fact. That being said, this is more than a worthy sequel. It continues the story of Norman and his mommy issues, doesn’t just retread what was done before, has an effective mystery, a cast of great characters, and a powerhouse performance by Mr. Perkins. Therefore I can highly recommend this movie to the Psycho lover in all of us.