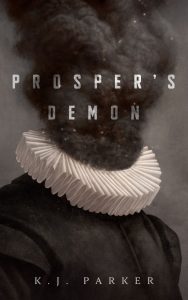 The novella PROSPER’S DEMON, by author K.J. Parker, will cause more than a few sleepless nights. The protagonist is an exorcist, whose name is never made known to us. His tactics have been questioned, in spite of the end results he has accomplished. In exorcism circles, this has found him labeled as morally questionable, as he focuses more on exorcising the demonic spirit while caring little for the human being whose body it possesses.

The case of Prosper of Schanz, a noted man of science, will be a staunch challenge for the exorcist. Prosper is an extremely strong-willed, intelligent person whose goals include raising the world’s first philosopher-king. The fact that he is demonically possessed makes things extremely difficult, as it is not easy disseminating the spouting of a demon from the man who is driven by the purest principles of science along with various philosophical tenets.

Prosper is a man in his sixties, and while he was under the influence of a foreign emissary, it would take four strong men to pry him from his chair to hold him down. His change in personality was in stark contrast to the man his friends, family, and neighbors knew so well. He was at one time a popular painter and sculptor before becoming a learned scholar in the sciences. All this put extra pressure on the exorcist to return Prosper to the person everyone knew him to be.

The exorcist is also in turmoil because the man known as Prosper began to create some of his finest and deepest work while allegedly in the throes of demonic possession. As he puts it, Master Prosper—via a collaboration between himself and ‘them’ that may possess him—has produced unspeakable, impossible, and wonderful sketches during this time. The moral question almost becomes one that challenges his family to decide whether or not he needs the exorcism cure.

PROSPER’S DEMON is a taut novella that provides worthy reading to all who pick it up. I would like to see author K.J. Parker flesh out a novel-length work featuring the exorcist to see where he might take things. A chilling and insightful read.