Professor Challenger: The Kew Growths and Other Stories – Book Review 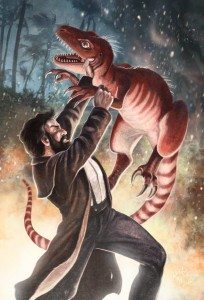 Professor Challenger: The Kew Growths and Other Stories

About a year ago, I had the pleasurable opportunity of reviewing William Meikle’s Sherlock Holmes: Revenant (http://michaelrcollings.blogspot.com/2012/04/sherlock-holmes-revisited-usual.html). Given my responses to the earlier book, when I received a review copy of Professor Challenger: the Kew Growths and Other Stories, I could barely wait to begin reading.

That was last Thursday. Today is Saturday.

Which means that the eagerness was fully justified and well rewarded.

Imagine if you will, a convivial gathering of several men noted for their storytelling, their varied outlooks on the world and what it does—and might—contain, and the enduring strength of their characters a century or so later. Imagine them speculating about stories that might be written, could be written, should be written, then turning to yet another of their fellows—this one himself fictional—and turning him loose with the ideas.

The result of such a meeting might be the stories in Professor Challenger. The men gathered at that imagined event would include, first and foremost, Sir Arthur Conan Doyle. Although Sherlock Holmes is arguably his most popular and most readily recognizable creation, Professor George Edward Challenger certainly has a following of his own, not only for the exciting adventures of The Lost World (1912), but also for the lesser-known but still remarkable The Poison Belt (1913), The Land of Mist (1926), “When the World Screamed” (1928), and “The Disintegration Machine” (1929).  Meikle pays appropriate homage to The Lost World in this collection in a long tale, “The Valley of the Lost,” set on an almost unreachable plateau in Montana inhabited by sabre-tooth tigers, wooly mammoths, gigantic eagles, and a race of miniature humans; but his Challenger also reflects the eagerly scientifically bent of Doyle’s often bombastic, always headstrong character. In several of the stories—most notably “Ripples in the Ether” and “Parting the Veil”—he fiddles with mechanisms that threaten the existence of humanity itself. In other stories he explores the depths of mysterious caverns and searches the banks of a Scottish loch, always on the look-out for ways to explain strange events by scientific means. And always accompanied by his intrepid reporter/friend, Edward Malone.

Malone would, of course, be the fictional person at the imagined gathering. Malone’s contribution, much like Dr. Watson’s in Doyle’s originals and in the multiple pastiches since, is to write down what happens. He frequently hesitates when Challenger forges ahead; he often relies on Challenger’s bull-like strength when his own fails; he is willing to fall back on superstition and legend when Challenger’s scientific approach seems to fail. But throughout everything, he is the staunch observer, the trusty scribe who ultimately reveals all, even deep, dark secrets that the British government does its best to cover up.

Also present at the gathering, though less directly involved in the storytelling, would be several notables, contemporaries of Doyle but of vastly different imaginations. One would be H. G. Wells, whose most memorable characters—invading Martians—do not quite make an appearance in “The Penge Terror” but very nearly do so. More vocal, perhaps, would be the American H. P. Lovecraft, whose imagination helps inform “The Kew Growths,” with their reference to the mystical plains of Leng”; and “Drums in the Deep,” with its evocation of ancient catacombs and secret rites, culminating in a chant to Dagon. Robert Louis Stevenson provides the ultimately explanation for “The Ape-Man,” and Nicholas Tesla—present by means of a trans-Atlantic telephone call—helps resolve the key problem in “Parting the Veil.”

Throughout Professor Challenger, Meilke adroitly maintains the illusion of an early twentieth-century observer of mystifying and threatening encounters while slyly and often humorously suggesting his twenty-first-century audiences. Malone never refers to zombies in “Parting the Veil,” for example, preferring the more generic undead; but modern readers will immediately recognizing the slavering hordes that rise from London’s soil and the threat of a “zombie apocalypse’ only narrowly averted. The result is a collection of eleven tales that range from action-adventure to horror, each accompanied by an appropriate, often stirring illustration by M. Wayne Miller, whose black-and-white renderings make shadows come alive.

As was Sherlock Holmes: Revenant, Professor Challenger: The Kew Growths and Other Stories is a credit to both the originator and the modern storyteller. My only complaint is that, as short stories, several of the tales seem truncated—I would certainly not mind reading more about the unknown Montana plateau or the rise of the zombies in last-century London. With what Meikle has given us, however, I remain grateful…and thoroughly entertained.