Press Release: WE FEED THE DARK

WE FEED THE DARK: TALES OF TERROR, LOSS & THE SUPERNATURAL 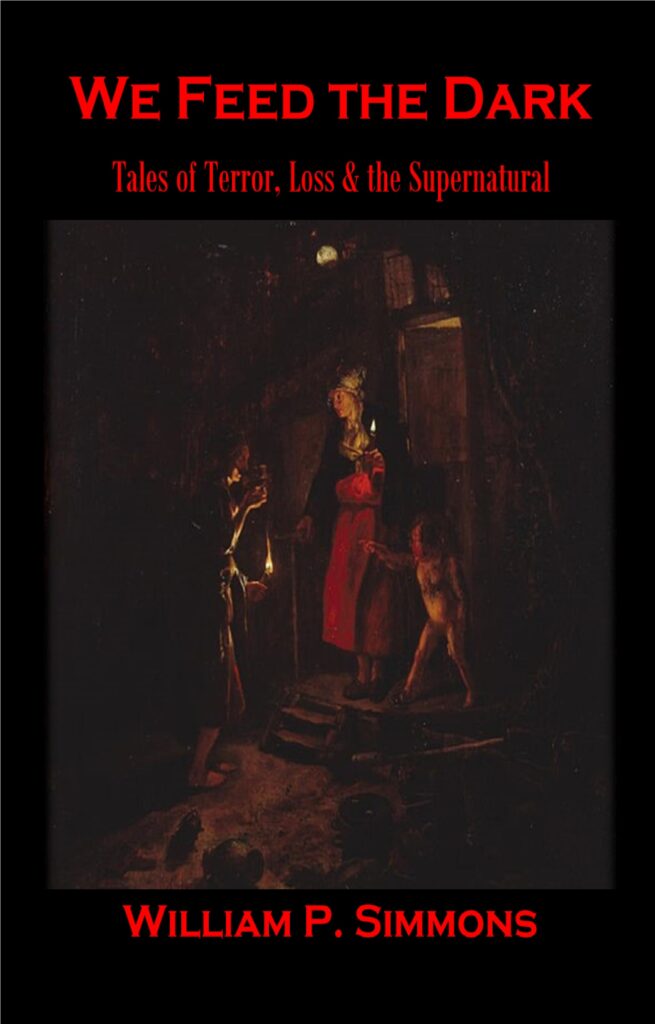 Horror has a price. Will you feed the dark?

Fiction is the numinous side of truth. Writers and readers enact an insidious ritual, giving birth to terrible new realities. Shadow House Publishing reveals the secret geography of nightmares in WE FEED THE DARK: TALES OF TERROR, LOSS & THE SUPERNATURAL, the first collection in fifteen years by critically acclaimed, Amazon bestselling author William P. Simmons.

In 2006, after earning a reputation as a unique voice in horror, William P. Simmons disappeared. This September, he returns with a stunning and heart-wrenching collection of interconnected fiction, autobiography, and revelation. These atmospheric and haunting stories chart the terror, loss, and supernatural dread that hides within the everyday. Simmons tells us a terrible truth: we feed the dark, nourishing it with our fears and desires. In turn, we are fed by it. This collection subverts reality, asking where fiction ends and life begins.

Originally published in such venues as Cemetery Dance & Dark Discoveries, these critically acclaimed supernatural and psychological tales include three Honorable Mentions from The Year’s Best Fantasy & Horror. Featured in Rue Morgue, All Hallows, and Publisher’s Weekly, Simmons’ atmospheric weird fiction has been praised by bestselling authors T.M. Wright, Nancy Kilpatrick, Hugh B. Cave, and many others. This metafictional assault tells the story of a haunted life…and the secret life of stories.

“…like being taken back forty years and discovering Poe for the first time, and M.R. James, and Shirley Jackson.”—T.M. Wright (Strange Seed)

In Harper’s Mill, a rural New York village just outside the Catskills, shadows walk, nightmares live, and reality is as restless as the dead. A child flees from spectral punishers in an endless cemetery; a widow attacks her husband’s spirit; a teacher is tormented by abandoned children; salesmen replace people’s personalities, and a woman is reshaped by her lover’s desire.

In shadowlands between our sunlit world and the unknown, a husband watches his wife’s nightly suicide, a corpse offers a recluse macabre salvation inside a wall, and death claims people unlucky enough to fit into a peculiar jacket.

In a key story of both this collection and Simmons’ life, a father tells his children stories to protect them from the “Night Man”, a terrifying figure who only fiction can repel. “Feed the Dark”, Simmons’ first new tale in over a decade, is a metafictional confession behind his disappearance, his writing, and the sentient darkness that shapes our lives.

In a funeral feast of horror, surrealism, and suspense, Simmons invites you to savor dread. You may never look at fiction–or life–the same. Together, you will feed the dark!

Available September 1, 2021 as a Kindle and trade paperback from Amazon.

About the Author: An active member of the HWA, William P. Simmons is an Amazon bestselling author, editor, and critic of supernatural horror fiction. Eight of his stories earned Honorable Mentions in The Year’s Best Fantasy & Horror. His collection By Reason of Darkness was praised by Publisher’s Weekly, All Hallows & Cemetery Dance. Other collections include Becoming October and Dark Harvests. Authors Graham Masterton, Hugh B. Cave & T.M. Wright have endorsed his work, and he has interviewed such legends as Richard Matheson, F. Paul Wilson & Caitlin Kiernan. He has reviewed for Publisher’s Weekly, Cemetery Dance, Hellnotes, and Dark Discoveries. He is the bestselling editor of the anthologies Season of the Dead, Monster Carnival, Yuletide Frights, and Wildwood: Tales of Terror and Transformation from the Forest. He battles depression, anxiety, heart disease, and a darkness that only writing keeps at bay.