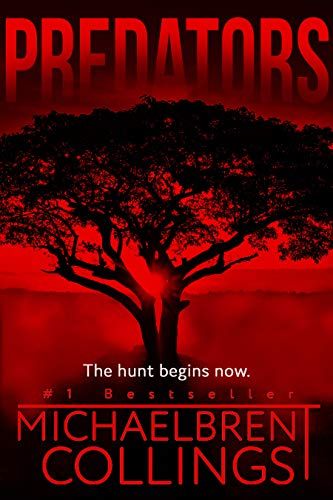 Michaelbrent Collings is one of those solid horror authors who always delivers exactly what you expect he will. He’s done so again with his latest horror thriller, Predators, set in Africa when a photo safari goes disastrously wrong. Lots of horror authors have used animal antagonists, including some unlikely ones (Guy N. Smith’s Crabs series beginning with Night of the Crabs comes to mind), as well as the obvious Cujo by Stephen King. Predators is Michaelbrent Collings’ Cujo, and I mean that in the best possible way. Though Predators is set on the African plains, you might expect that lions or other big cats would be the primary antagonists—not so! Here, Collings’ ill-fated safari tourists are stalked by hyenas. If you think of hyenas as cowardly dog-like scavengers that can be scared away by loud noises or a rolled-up newspaper applied to the snout, you’d be very, very wrong. Take a look at some clips of hyenas on YouTube and you’ll quickly realize that they are fearsome predators in their own right who operate in large packs and are more than capable of taking down humans….

A book like this depends not just on a clever premise—which we have here—but excellent characterization, which is also present in spades. The chief protagonist is an aspiring children’s book writer named Evie who has been psychologically and physically battered by her husband (he’s on the safari as well). Needless to say, Evie must come into her own in Predators if she is to survive. Though she’s led a deeply tragic life, she’s an engaging character. Evie is joined by a host of others: a loving family composed of a dying man, his blind daughter, and the girl’s spitfire grandmother; a gold-digging actress and her sugar daddy; a YouTube sensation who isn’t living if he’s not taking a selfie or livestreaming; and Naeku (and her brother), the local safari guides. It would be all too easy for such characters to fall into stereotypes, but we don’t have that here; these are fully realized characters in their own right, with interesting motivations, backstories, and development. We’ve also got chapters from the perspective of the hyena pack’s alpha female, which added considerably to the story. I’ve seen animal perspectives done well and done poorly, but Collings has done a good job of presenting the alien mindset of a nonhuman species without becoming silly or unrealistic as these can sometimes become. We’re left with a desperate race for survival and escape against seemingly impossible odds and horrific violence—what a great recipe.

Were there a couple tweaks I would have liked to see made here? Sure, there almost always are. For instance, the motivations of the terrorists who try to hijack the safari are only hastily sketched out; the hijacking attempt needs to happen to set the disaster in motion, but it’s not really clear why they do what they do. That is quickly forgotten once the action moves forward. Also, by the end of the novel Evie is simply in too rough shape and lacks the physicality to go truly head-to-head with a hyena matriarch, as awesome as that would have been—but fortunately she’s not saved by a deus ex machina. These quibbles aside, Predators was a thrill ride. Good characterization and action, with an intriguing premise. Highly recommended.