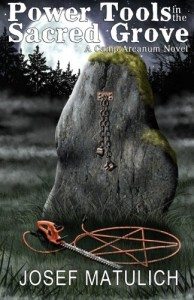 As the first book, Camp Arcanum (2014) ends, contractor Marc Sindri has encountered yet another delay in the construction of the ren faire village in Arcanum, Ohio. This particular delay involves Sindri barely surviving an invisible tentacled demon’s enthusiastic attempts to render him into a pile of chopped meat with a tool belt. The demon was summoned by Jeremiah Stone, a professor of demonology and metaphysics at the local college. Stone also is the evil ex of Brenwyn, head of the local Wiccan coven and the romantic interest of the contractor.

As book two opens, Sindri is attempting to convalesce, made all the more difficult by his construction timetable disintegrating and the sexual tension with Brenwyn. But Marc Sindri is a hard man to kill – almost as hard to kill as Jeremiah Stone. But even as Stone remains a threat, a more looming threat is the growing relationship between witch and contractor. Both have emotional baggage and neither is inclined to share. Instead, it comes out in small bits, threatening to poison the relationship. Throw in construction orders being sabotaged, undead skinless vermin, OSHA looking at his jobsite, the Vatican’s curiosity about his miraculous recovery, and a return visit from Stone, and Sindri is beginning to think being eviscerated by the Qliphotic demon may not have been the worst idea on the table.

Author Matulich continues his relentless quest for the perfect balance between cleavers and cleavage. And he successfully keeps that delicate balance between horror and horrific puns; in other words, there is no sophomore jinx here, merely sophomoric humor. And there is definitely the hint of a third book, which is good news to the readers, if not for a certain contractor who is discovering that swinging a shovel at your problems will only get you so far in Arcanum.