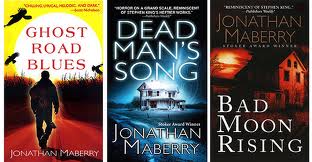 For the purposes of this review, I am going to treat the three volumes of Jonathan Maberry’s Pine Deep Trilogy as a single novel, one that needs to be read in sequence, one book following directly upon the other, to get an accurate feeling for the pacing of the narrative, the development of characters, and the gradual but grandly inexorable movement toward a fitting and proper climax.

True, the books were initially published over a three-year span.

True, in the introduction to Bad Moon Rising, Maberry refers to the individual books as stand-alone novels.

True, he assures readers that there is sufficient backstory provided in each to make the story coherent. And there is.

But, as with such other multi-volume works as Tolkien’s The Lord of the Rings, the decision to publish the story as a trilogy seems to have been more market-driven than a response to the narrative itself. In essence, it is a single book.

The story begins horrifically in Ghost Road Blues, when a tourist is dragged kicking and screaming from a hayride and is eaten in sight of the rest of the group (with, a few pages later, a delightful twist). And it ends horrifically with the final, inevitable revelation of Evil and of Good in Bad Moon Rising. In between, Pine Deep weaves the lives of multiple characters around a core of evil…not in a far-distant, almost mythical place that requires a hero’s quest to reach but somewhere closer, more immediately deadly, and every bit as threatening to humanity. It still requires heroes to confront the Evil, but heroes of a more solid, paradoxically more ordinary sort.

For generations, the small town of Pine Deep in rural Pennsylvania has suffered from hauntings and shadows. Three decades earlier, the town suffered from a Black Harvest, with crops blighted and ruin threatened. The sequence of catastrophes only ended with the death of a serial killer, his body buried in the mud at the heart of Dark Hollow.

Or rather, everyone assumed that it had ended.

Now, Pine Deep enjoys the acclaim of being “America’s Most Haunted Town.” Tourists travel for miles around to participate in dozens of activities during October, climaxing on Halloween Eve. One of the people most involved with the arrangements is Malcolm Crow, owner of a novelty shop that specializes in horror, brother of one of the dead killer’s earlier victims, and the only person how knows—knows­­—that the wrong man has been blamed all of these years.

Just as the town begins to gear up for perhaps their best Halloween ever—the time when most of the businesses finally make it into the black—things begin going desperately wrong.

The Black Harvest returns. Crops die; pumpkins turn to mush on the ground; corn is blighted and inedible; almost nothing survives, and the town is threatened with economic disaster on a scale unseen for thirty years. Everything depends on the Halloween festivities.

Then the bodies begin to appear.

And strangers come to town, bringing death and devastation. Worse still, even when one of them is killed…he refuses to stay dead.

Malcolm Crow and half a dozen of his closest friends begin to understand that the terror of three decades before never ended…it has just remained quiescent. Waiting and growing.

And now it struggles to rise and in doing so presages horror not only for Crow and his small cohort, not only for the town of Pine Deep and the thousands of tourists crowding its streets, but for all of humanity.

In many ways, the Pine Deep novels—taken as a whole—share much with some of the finest dark fiction yet written. They have the scope required to delve fully into Evil. At something just under 1,500 pages in the print editions, they allow for the meticulous creation of a world in which shadows lie just beneath the surface, in which everything is tenuous and can be destroyed.

Their length and the sophistication of their vision recall Stephen King at his best, as in The Stand, or the vast, apocalyptic narratives of Robert R. McCammon (Swan Song) and Dean R. Koontz (Strangers). The subtle intrusion not only of horror but of the supernatural into a small town echoes King’s ’Salem’s Lot and Needful Things, with their systematic isolation of individuals and the incremental, festering growth of evil. The shifting time-frame, showing graphically how the past afflicts the present, suggests IT; the presence of a decaying house waiting at the center of Dark Hollow for the return of its master evokes King’s terrifying Marsten House.

This is not to say, however, that Maberry is merely mimicking King. Quite the contrary—there is freshness in his use of age-old horror tropes, including not only ghosts but zombie-like creatures, werewolves, and vampires of multiple species. He has tapped into lesser-known traditions to bring his horror to reality, with the consequence that things that might otherwise be rather ho-hum—yawn, another vampire story—become newly alarming. Nothing is quite what we might expect, yet everything fits neatly into the world Maberry has created.

There is, in addition lyricism in his prose, a love of the rhythms and sounds of language that lends an extra edge to terror. In fact, many episodes and much of the imagery is built around music…specifically, the blues. And, at the appropriate moments, touches of humor to break the cumulative sense of fear, oppression, danger, and abhorrence.

So, yes, Ghost Road Blues, Dead Man’s Song, and Bad Moon Rising can be read and enjoyed as stand-alone novels.

But to appreciate the depth, the complexity, and careful manipulation of time, setting, and character that epitomize the story, do yourself a favor: Read them all.