Path of the Dead – Book Review 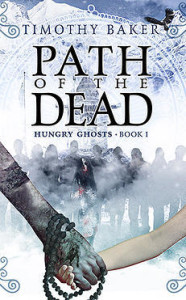 Path of the Dead

Another day, another zombie apocalypse. But what’s this? A story set in the mountains of Tibet, peopled with characters like an elder monk, a Shaolin monk, a warrior nun, a Chinese soldier, and an orphan child? Path of the Dead (the first book in the “Hungry Ghosts” series) is a very atypical entry in the zombie genre, for a number of reasons.

The onset of the epidemic comes fast and brutal, as the village of Dagzê is overtaken by the newly-risen dead. An unlikely band of people escapes the carnage and heads to the closest place of safety, an abandoned temple nestled high in the mountains. Once there, they barricade themselves against the encroaching horde.

This is all standard as far as the genre goes, but Baker makes good use of the setting and the spiritual mindset of the characters. The origin of the zombies is unclear, but it’s posited that they’re hungry ghosts, beings in a state somewhere between death and life. Mara, a demonic entity from Buddhist mythology, plays a major role that becomes clearer as the novel progresses. These concepts, as well as the approach of the zombies, cast a dark shadow over the sense of tranquility that runs through much of the story.

There’s an oddly pastoral feel to the novel, and the setting is like a character in itself. Flora and fauna are brought to vivid life, as are mountain paths, flowing streams, and the night sky. Some passages are poetic in their simplicity, written with appropriately Zen-like grace. Unfortunately the prose falters in other places. There’s an abundance of pronouns in many instances, making it unclear who is doing or saying what. That aside, the writing fits excellently with the tone of the book. It brings to mind a fable or fairy tale, and this juxtaposes well with the stark violence of the action sequences.

The characters are well-balanced in their personalities. The unfailing calm of Tenzin, the elder monk, contrasts with the unpredictable natures of the nun and the Shaolin monk. Cheung, the soldier, is constantly at odds with the rest of the group, but finds an unlikely friend in the orphan Chodren.

Despite their outward calm, these characters can all hold their own in a fight. Whether they’re making near-impossible jumps, slinging deadly blades, or going in with guns blazing, it’s anything but a one-sided battle. Baker could have easily gone the over-the-top exploitation route with this concept, but plays it straight instead, to the novel’s benefit. Still, there is some tongue-in-cheek humor here (particularly in a heated fight involving a mule).

With its distinctive setting, characters, and mythology, Path of the Dead is a good starting point for what’s sure to be a fascinating series. It doesn’t end on a cliffhanger, so it works as a standalone novel, but there are intimations of much greater things to come. Recommended.