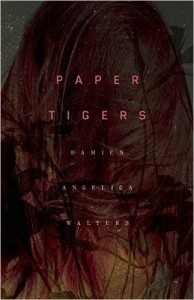 With only one novel and one collection to her name before this, Damien Angelica Walters has nonetheless garnered quite the following in genre circles, and with good reason.

In Paper Tigers we meet Alison, a young woman bearing the scars – physically and emotionally – of a fire that stopped her former life in its tracks. Once well on her way to becoming a teacher, she now lives a life of isolation, afraid to set foot outside of the house. Her body is unrecognizable, her fiance is gone, her hopes and dreams seem a distant memory. Her mother and physical therapist are trying in earnest to help, but things are moving much too fast for her to handle. She hasn’t lost hope, but she’s stuck in a sort of limbo.

One day, having summoned the courage to get out for a walk, she comes across an antique shop wherein she finds a curious photo album which might be just the thing she needed. The photographs are like doorways to the past, to a house inhabited by a man who has the power to take away her scars. It’s an incredible offer, but of course there’s a price to be paid.

From here on out, as Alison moves between past and present, her internal plight and the things happening to and around her are masterfully intertwined. In some passages Paper Tigers reads like a psychedelic, classically gothic fever dream, while in others it becomes a quiet rumination on the way past scars can transmute and take on an internal life of their own. The whole of it is wrapped in purposeful, delicate prose. Upon rereading, it reveals multiple layers, both of Alison’s psyche and the nearsighted way our society often views the contrast between beauty and ugliness.

The novel’s structure lends itself to a sort of vicariousness that has to be difficult to pull off, and it’s testament to Walters’ skill as a storyteller that everything here comes together as well as it does. As Alison drifts in and out of the album, the reader becomes drawn into the book she inhabits. Sometimes gentle, sometimes harsh, the way these pages flow is like the breathing of a living thing. It doesn’t quite cross the line into metafiction, but it’s fitting that the last part of it is called “The Final Page”.

This isn’t just a great novel – it’s one of the best horror novels in recent memory. If you’re a fan of the genre at all, you owe it to yourself to read Paper Tigers.