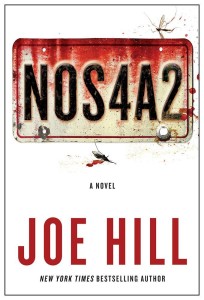 NOS4A2 is Joe Hill’s third novel after The Heart-Shaped Box and Horns.  As most readers already know, Joe is one of Stephen King’s children, and I can tell you that the apple doesn’t fall far from the tree.  This novel is Joe’s masterpiece.  It’s the equivalent of King’s The Shining, and it cries out to be made into a feature film.  It’s been fun watching this young writer learn his craft with each novel over the last few years as he got better and better with the written word, until this stark tale of twisted horror was finally produced.  If Joe continues to write in the horror genre, I see him eventually taking over his dad’s mantle.  Now, I’m wondering what Joe’s fourth novel will be about, and if it will surpass NOS4A2 in sheer scope and unadulterated terror.

The story of NOS4A2 centers around one Charlie Manx, who’s probably around 116 years old, but looks much younger.  He drives a black classic Rolls Royce Wraith, which in many ways is the star of the novel.  The Wraith is the totem for Manx.  Though it helped to destroy his family in his earlier years, the car has kept him young in appearance and full of vitality ever since.  At the same time, however, the car needs the presence of children in it so it can suck the positive attributes out of them and replace the emotions with negative ones, turning the little sweeties into fun-loving creatures of the night.  In some ways the car is like a shark, always moving and feeding off the suffering of others.

Victoria McQueen is the second star of the novel.  Since she was a little girl and rode her Raleigh bicycle, her totem has been an old bridge, which carries her to wherever she wants to go.  And, it’s through this bridge that she first encounters Manx and the evil he perpetuates with his mysterious automobile.  Victoria (aka Vic) barely survives her first encounter with the creature who appears in human form and whose sole mission in life is the taking of children to Christmasland, where they will never experience unhappiness again and everyday is Christmas.  Charlie Manx comes very close to killing Vic that first time out and makes the mistake of going after her.  Manx doesn’t like it when someone stands in his way of collecting the kids for their adventurous trip.  Because of the mistake, he gets caught and spends the next two decades in prison.

Manx deteriorates during his stay in prison and eventually dies.

When his body is placed in the morgue and his heart removed, Manx manages to come back to life and escape, taking with him a bone-crushing silver hammer that he plans to use on Victoria when he sees her again.  Reuniting with the Wraith, Charles Manx begins to heal from his old age and to grow young again.  It’s his intent to get revenge on the girl who’s now a woman with her own child.  Manx does this by kidnapping her son, Wayne, and forcing her to come after him.  Though nearly everyone seems to think she killed Wayne and buried his body somewhere, Vic knows that she’s only one who can save her son.  She has to somehow get to Wayne before Manx and the car can do their damage, and she’s determined to fight with no holds barred to save Wayne.  She even has a satchel full of explosives to blast Christmasland to kingdom come.

One of the most important things to me about NOS4A2 is its originality.  Joe Hill came up with a new and exciting approach to the vampire legend, much like Matheson did with I Am Legend, King with Salem’s Lot, Whitney Streiber with The Hunger, and F. Paul Wilson with The Keep.  It’s not easy tackling a well-known theme and coming up with an utterly fresh idea.  Joe still managed to do it, and to carry off the concept with brilliant success.

Even better, Charles Manx and Vic are written and described with total believability.  The good and evil in them pulsates right off the page.  You find yourself drawn like a magnet to Manx and the way he smoothly entices you into his dark world.  Victoria McQueen, however, is hell on wheels, and you don’t mess with a mother and her cub if you know what’s good for you.  I would definitely want Vic covering my back in a tight situation.

The pacing of the story is about average until the last 125 to 150 pages.  Then, the brakes are off, and the story speeds forward to its hard-hitting conclusion.  I enjoyed the way things were wrapped up.  Joe explains that a change in the ending was suggested by his mom, Tabitha.  This is the lady who made history by pulling Carrie out of the trashcan and telling her husband that it was good and he was onto something.  I wish she was my editor!

Of course, Joe Hill pays homage to his dad and mother, and to a number of different things from Stephen’s previous novels throughout the book.  For me, it was almost like returning home after being away for so long.  The old memories seemed to mix with the new ones so I wasn’t sure which was which.  It felt good and made me smile in places.

So, if you want a great horror novel to read, check out NOS4A2.  Like I said earlier, it might just be the best horror novel of 2013.  Still, there’s his dad’s new book to read, Dr. Sleep, and The Abominable by Dan Simmons.

The final verdict is therefore still out, but—