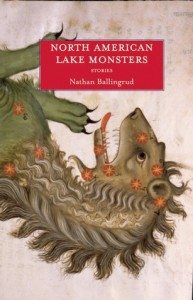 The titular lake monsters of North America do not exist in any objective sense. They are vehicles for our fears and objects on which to project our hopes and dreams. It doesn’t really even matter whether they exist or not: people organize their lives around them. The idea of them speaks to a yearning for something. Something else. Something out there.

This collection by Nate Ballingrud includes nine stories, including the Shirley Jackson Award-winning The Monsters of Heaven. These are stories populated with monsters, including a number of familiar ones, but they are anything but conventional. Many horror stories, especially short ones, are about a monster or a location. The characters exist primarily to encounter that element and to demonstrate its impact. The characters in North American Lake Monsters are richly drawn. They are fallible, selfish, and often filled with violent rage. They struggle with their obligations to themselves and others. Their pain and regret is communicated with raw and painful detail, and acted out in bad decisions. Monsters and the supernatural are the least of the problems most of these people have. In some cases, it isn’t even clear that a supernatural element is necessary; they could just be ordinary stories of human tragedy, and another writer might have edited out the fantastic element from some of them. This would have been a loss.

In most of these stories, the main characters face some combination of domestic or natural disaster in addition to an encounter with the supernatural. The touch of the strange may be slight, but in each case the protagonist spirals out of orbit. The tragedy and horror is not usually found in the monster, but in the humans. The idea that humans are the real monster is not new, but this is something slightly different. It is clear that the monsters in these stories are, in fact, monstrous. They are not misunderstood outsiders, but are explicitly strange, violent, and even malevolent creatures: monsters in the truest sense. I think what makes the collection so unusual is that Ballingrud so skillfully avoids either easy solution in his stories. The characters do not exist simply so they can be traumatized or destroyed by the monsters, and the monsters themselves do not exist as simple metaphors or just to shine a light on human characteristics.  Each exists independently of the other for narrative purposes. The stories of the monsters themselves are often unknown, and in the cases in which we do learn them, they are not made more human as a result. They do not instruct, or offer a hint of a greater moral order. They simply exist, occasionally intersecting with our lives, and if they are seen as more than that, then that perspective is most likely illusory. The ultimate focus is not on the supernatural events but on interior conflicts. Indeed, a number of the stories end with the protagonist lost in contemplation, crushed by the weight of their own self-understanding, or lack thereof.

The beauty of the work as a whole is that it offers no clear and easy answers; any generalization that might be supported by some stories is contradicted by others. It makes for an intellectually stimulating collection that pulls the reader in unexpected directions. The pieces don’t always come to a satisfactory resolution, but it is clear that this is a conscious choice. The lack of denouement, the uncertainty, is part of the fabric of the individual stories and of the collection as a whole. It is suggestive of a particular kind of world: one that is dark, weird, and just beyond our ability to impose order and understanding. These are not happy endings. They are sad and unsettling, but always beautifully written with skillful and insightful prose. It is a remarkable collection.