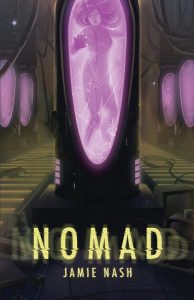 There are a couple of very interesting facts about the novel NOMAD from author Jamie Nash that need to be shared up front. The first is the fact that NOMAD had originally begun its life as a screenplay (and what a great Sci-Fi movie it would make). The second is the fact that using the term page-turner for this novel is doubly to the fact that it is not only written as a high-octane thriller but also because there are no breaks or chapters in the entire novel.

I am not sure if this unorthodox style was the editor’s choice or if Jamie Nash intended his novel to be read in one sitting, but in this case the plan works. NOMAD bears all the great earmarks of a sci-fi thriller and it begins with the opening sequence. It begins with a young woman drowning in blood. Actually, she is trapped within a tube of viscous liquid resembling a pinkish/red color. She sees someone outside of her tube or chryo chamber taking an axe to it and she is eventually freed.

The young woman, also our narrator, has no memory of who she is, where she came from, or what she was doing in a chryo chamber. She finds herself paired with a few others who are going through the same situation. The names she gives her newfound colleagues are simple ones that describe them the way she sees them – Hero, Shaft, and Crazytown.

As the small group explores their home, they find little answers but several dangers around every turn. They are attacked by machines and killer robots that use huge buzz saws and tentacle arms to maim or kill them. The group believes that some faceless being must be behind all of this. At one point, our narrator feels like they are in a human version of the game Battleship, in which their faceless enemy is blindly setting up traps to kill them while also not having any way of knowing where they are any given time.

Nash has set up a classic, claustrophobic outer space atmosphere that immediately reminded me of films like the classic Alien. The group does discover a few alarming facts; the first is that they are on a spaceship that appears to be hurtling at a quick speed towards an unknown planet. The other is the box of files – almost like personnel folders – that contain photos and names of various “employees” from this space vessel. One shared trait of these people is that they were mostly criminals or people who led violent lives. The other, more chilling, fact was that the people in the files were all listed as deceased.

Not having any chapters or even a break between paragraphs makes the reader feel like they are hurtling forward through the narrative in much the same way as the spaceship is on target to collide with the unknown purple planet outside its windows. I would have liked for a moment to catch my breath and pause between “scenes,” but I fully understand Nash‘s decision to fashion his book in this manner as it a very effective and immersive story-telling tool.

There are quite a few memorable moments in NOMAD. One involves the battle between humans and a giant, slug-like creature with no eyes but a ravenous mouth full of teeth that resemble a great white shark’s. There is also the point when our female narrator recognizes that there exists a being known as the Nomad, an alien who can take on the guise of different humans to blend in. Discovering the Nomad will be an important part of the eventual showdown between our protagonist and the faceless individual who is the true puppet-master behind the action. NOMAD is a great read and a novel that is begging for a film treatment!