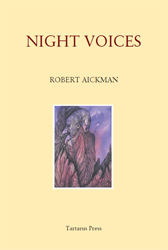 The final volume of the Tartarus series reprinting all of Robert Aickman’s fiction (with the exception of the elusive novel The Late Breakfasters) is an absolute must for any Aickman enthusiast, but certainly not the best way to get acquainted with that superb  British writer for those still unfamiliar with his work.

Night Voices collects five stories, the best of which is “The Stains”, a typical Aickmanesque piece where a widower falls for a naïve mountain girl who lures him to a lonely but simple  life . Their happiness is soon tainted by a slow but continuous corruption affecting both the man’s body and his former house. An inexplicable tragedy awaits around the corner.

In “Mark Ingestre: The Customer’s Tale” , a story with a dream-like texture, a man recalls how, as a teenager, he was  seduced under strange circumstances. His first sexual experience is described in a very restrained fashion, yet the tale is imbued with a strong, intoxicating eroticism.

Slightly less convincing, nevertheless able to captivate the reader, are “Laura” where  a mysterious  but soothing girl keeps appearing ,at long intervals, to an unhappy man (a puzzling symbolism open to various possible interpretations), and  the equally puzzling “Just A Song at Twilight” featuring a couple who decides to settle down in a foreign land by acquiring an isolated and dispiriting property in the middle of nowhere.

By contrast, “Rosamund’s Bower” is a second rate story that I find rather awful and totally unequal to Aickman’s  usual standard (and I’ve discovered that several other reviewers share my view)

The collection is augmented by the inclusion, in the same volume, of the posthumous novel “The Model”.  It is a fantasy piece taking place in pre-revolutionary Russia  revolving around a young girl with a couple of selfish parents, who ,dreaming of becoming a ballerina , assembles the model of a opera house and goes through a number of odd adventures. Quite different from the rest of Aickman’s work, except for its strangeness, the novel remains  unaccomplished and, although well written, lacks direction and purpose.  On the whole, the results are a bit disappointing.

As a further gift to Aickman lovers, the Tartarus edition also assembles the  interesting Introductions written by him as the editor of the first eight volumes of the mythical The Fontana Books of Great Ghost Stories, a short essay from Aickman himself, and an affectionate remembrance by Ramsey Campbell.