New Trailer for The Quiet Ones

On this night…THE QUIET ONES will be quiet no more.

Do you believe in ghosts? Watch the latest TRAILER from THE QUIET ONES to test your nerves.  The legendary Hammer Films is back this FRIDAY with a film that blends the supernatural and the scientific, as a group of university students journey into the dark unknown while experimenting on an “unwell” girl. Professor Coupland leads his students to terrifying and mysterious places as he pushes the boundaries in his experimentations on Jane Harper. Be sure to download the chilling new trailer below, and find out what is happening to Jane Harper FRIDAY!
DOWNLOAD the new trailer HERE! http://pr.mammothnyc.com/Quiet_Ones/Trailer_3.zip  or watch it below:
Get THE QUIET ONES tickets NOW » http://www.fandango.com/thequietones_170262/movieoverview 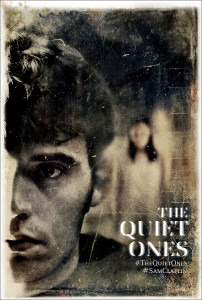