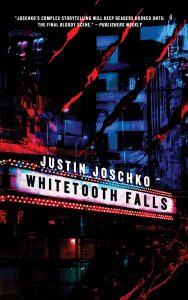 Homicide detective David Moore has never had a case quite like this: a series of savage murders targeting the family of Frank Ballaro, a mafia kingpin with half the city of Niagara Falls in his pocket. The killer strikes with inhuman violence, and always on the night of a full moon.

Meanwhile, grad student Iman Al-Qadari reads about the murders with growing dismay. Her boss, a prominent professor, has been acting strange over the last few months—wearing disheveled clothes, lashing out with uncharacteristic anger, and obsessing over a growing pile of occult literature. When Iman spots a red stain on his coat sleeve—one that looks and smells suspiciously like blood—the night after a grisly murder, the unthinkable starts to seem all too possible.

As David and Iman wrestle with an impossible enemy whose existence grows harder and harder to deny, a strange and sinister evil sinks its fangs ever deeper into Niagara’s throat. Can David and Iman find one another in time to pool their knowledge, solve the mystery, and stop the killings? Or will the creature feasting on their city swallow them as well?