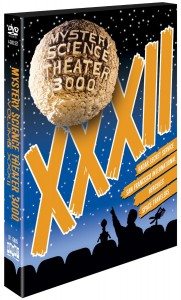 Mystery Science Theater 3000 (or MST3K to the faithful) was a TV show that ran from 1988 to 1999 about a guy marooned in space on the Satellite of Love. Part of a weird science experiment, he had to constantly watch cheesy B-grade (often Z-grade) movies in an attempt to find his breaking point. In order to survive his mind-numbing ordeal, our hero made some robot friends and together they make fun of, or “riff” on, all the bad movies. As simple as that sounds, something that fans of bad movies have done for just about forever, it was revolutionary to see it on television, not to mention hilarious. So much so, that even all these years after its last episode aired, the show still has a huge cult following, is constantly name dropped by comedians as a major influence, and lives on in two distinct incarnations today. Check out Rifftrax.com and Cinematictitanic.com for more info on both of those.

Thankfully the good people over at Shout! Factory have continued to put out the original MST3K television show on DVD for years. This four pack is their latest offering and it’s a must have for fans of offbeat comedy and low budget, usually horrible, genre fans. Their latest box set is MST3K: XXXII, or for Roman numeral challenged, that’s 32. Yes, this is the 32nd MST3K four pack to come out. For me and my fellow Misties (fans of the show) out there, we couldn’t be happier. If you’re a fellow Mistie, then you’re going to get this, that’s a forgone conclusion, but for you non MST3K fanatics, is this new four pack a get or a pass? Well get your favorite riffing buddies, be they bots or not, and let’s find out.

This four movie set has a nice mix of genres, with one notable exception: horror. Yes, sadly for us lovers of old, bad fright flicks, there won’t be any of that here this time around. That’s a bit of a bummer, but thankfully the four flicks picked for this set aren’t duds. There is Space Travelers from 1969 about 3 astronauts that get marooned in space when their rocket breaks down. Yes, this was Apollo 13 before Apollo 13, only made for about a tenth of the budget, stuffed with stock footage padding, and only made watchable thanks to the riffing from Joel and the bots. Then there is Hercules from 1958, the movie that kicked off the Italian sword and sandal craze. It’s pretty standard Greek mythology as told by Italian moviemakers looking to make a buck. San Francisco International was a failed TV pilot from 1970 all about the drama and “excitement” of running a major airport. Horror fans will spot Clu Gulager in this rather dull melodrama, but thankfully Mike and the bots manage to make it hilarious. The last episode/movie in this set is Radar Secret Service, a black and white crime drama from 1950. Of the four films, it is the one most padded and would be the dullest to watch, if not for the usual MST3K treatment it gets. While it might be the least funny episode in the set, it still has more than a few laughs in it and iw well worth a watch for those who have yet to see it.

On to the extras Shout! Factory has included in this four DVD set. Each episode has an introduction by Frank Conniff, the actor who played TV’s Frank in the early MST3K episodes. There are three featurettes to be watched here. The first is “Barnum of Baltimore: The Early Films of Joesph E. Levine,” the next is, “Marooned: A Forgotten Odyssey” and the third is, “A Brief History of Satellite News.” There is the mini-doc, “MST-UK,” about the show in Britain, hosted by Trace Beaulieu (Crow T. Robot) and Frank Conniff. Theatrical trailers for all the movies and four mini-posters by artist Steve Vance round out this nice collection of extras and goodies.

Mystery Science Theater 3000: Volume XXXII is a solid collection. While I would have liked one of the four movies to be something from the bad old days of horror, there is enough sci-fi and fantasy flavor here to satisfy most genre fans. And besides, it’s MST3K, they’re like pizza or sex: even when they’re not great, they’re still pretty damn good. Consider this new four-flick set recommended.