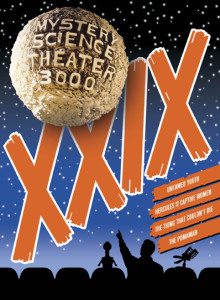 Mystery Science Theater 3000 (or MST3K) was a TV show that ran from 1988 to 1999 about a guy marooned on the Satellite of Love way up in space who had to watch cheesy B-grade (or often Z-grade) movies as some sort of deranged experiment. In order to survive his mind-numbing ordeal, our hero made some robot friends and together they make fun of, or “riff on”, all the bad movies. As simple as that sounds, something that fans of bad movies have done for just about forever, it was revolutionary to see it on television, not to mention hilarious. So much so, that even all these years after its last episode aired, it still has a cult following, is constantly name dropped by comedians, and lives on in two distinct incarnations today. Check out Rifftrax.com and Cinematictitanic.com for more info on both of those.

Thankfully the good people over at Shout! Factory have continued to put out the original television show on DVD for years. This four pack is their latest offering and it’s a must have for fans of offbeat comedy and low budget, usually horrible genre fans. Their latest box set is MST3K: XXIX, or for those who don’t do Roman numerals, that’s 29. Yes, this is the 29th MST3K four pack to come out. For me and my fellow Misties out there, that should be applauded, but should this new 4-pack get a standing ovation? Well get your favorite riffing buddies, be they bots or not, and let’s find out.

This set has a nice mix of cheesy, horrible movie goodness in a variety of flavors. For us horrorheads, there’s The Thing that Wouldn’t Die, a bit of 1958 headless Satanist schlock that so deserves the MST3K treatment. For fans of fantasy there’s Hercules and the Captive Women from 1961 and the land that put out more cheesy sword and sorcery flicks than anyone else: Italy. From back in the 50s, not to mention the first season of MST3K, comes a cautionary tale of rebellious youth gone awry, Untamed Youth. It doesn’t rank up there with other crazy youth flicks from the same era, but with the help of Joel and the bots it’s at least a funny watch. Last, but in no way least, is one of my all-time favorite episodes of MST3K, The Pumaman. This 1980 Italian (yes, again) take on the superhero genre was amazingly awkward and inept, and the perfect target for some riffing. The fact that it has Donald “Hallwoeen” Pleasence as the over the top, scene-chewing bad guy. This set is worth getting for this movie/episode alone, but the fact that it’s a potpourri of genres sure to suit anyone’s taste, and each and every episode is a winner, is the delicious icing on this tasty cake.

As for extras, Shout! Factory has few worth pointing out. There are four mini posters included with the boxed set, one for each movie. There is also a special feature on the artist, Steve Vance, who does all the poster art. There are two interviews here that I thought were very nice. One is with Untamed Youth star, Mamie Van Doren, and the other is with The Pumaman himself, Walter G. Alton, Jr. It was good to see those actors not get uptight about the skewering the Satellite of Love crew gave to their films. There is a feature ’58 horror flick called “The Movie that Couldn’t Die.” Series creator, and first test subject, Joel Hodgson introduces all four episodes and there is a featurette on his one man show, Riffing Myself.

Mystery Science Theater 3000: Volume XXIX is a great MST3K collection. It really has a bit of everything: horror, fantasy, superheroes, and 50s youth gone bad. If you’ve never seen MST3K before, then this ‘a little bit of everything’ sampler is a great way to start. But do yourself a favor and start with The Pumaman. Yeah forget that saving the best for last thing. But then I sometimes eat desert before the meal. Anyway, consider this highly recommended.