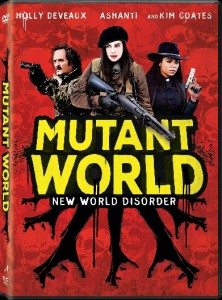 After emerging from their bunker following an apocalyptic meteor strike, a group of survivalists discover the world is overrun with crazed mutants in MUTANT WORLD, coming to DVD May 26th from Sony Pictures Home Entertainment.

In the aftermath of this cataclysmic event, the “doomsday preppers,” led by Kim Coates (“Sons of Anarchy”), hit the surface and must work together to keep from being attacked. The group meets a mysterious traveler, played by singer Ashanti (“Army Wives”), who claims a safe haven exists, but in order to reach it, they must first prepare for an all-out war against the mutants that threaten their very existence. MUTANT WORLD also stars Holly Deveaux (“Hannibal”) and Amber Marshall (“Heartland”).

Synopsis:
A group of doomsday preppers emerge from their bunker 10 years after an apocalyptic meteor strike, only to discover that crazed mutants have overtaken the world. Trying to survive through the terrible nights, they meet a mysterious traveler – played by singer Ashanti – who claims a safe haven exists, but to reach it they first have to prepare for all-out war.