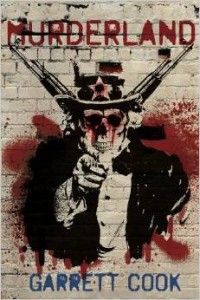 Envision a world that reveres serial killers and treats them like rock stars. Would the dissenter be considered the true psychopath?

This was only one of the questions that came to mind while reading Garret Cook’s dystopic, very violent, and gloriously bizarre Murderland. In Murderland, Jeremy Jenkins is a pharmacist living in a world that worships serial killers. Fans and groupies call themselves names like Bundy Girls and Ripkids, wallow in a culture called Reap and hangs out at a Reap bar named Murderland. The government more than tolerates it creating safe zones where killer celebrities can hide in relative safety. The superstar of the psychopathic murderers has his own TV show. Even though the love of Jeremy’s life Cass is caught up in the fandom, he sees a bigger threat; robotic like “demons” controlling people and getting girls pregnant. Jeremy sees these creatures as in league with the entire Reap culture.

I don’t think it is a spoiler to say Jeremy has major issues of his own. But who would be crazier? A psychopathic society or a psychopathic murderer committed to taking down that society. The author is taking on a big task in this novel. It is foremost a horrific satire examining our society’s cultural obsession with the media, our worship of pop idols, and the exploitation of violence. There is more than a little anarchic playfulness amongst the terror and violence. Yet Cook throws in a love story (Cass isn’t all that together neither) and manages to keep the action flowing throughout the story. But here is where we get into a few problems. The first part of the novel reads like an exhilarating bizarro American Psycho in which the emphasis is on the two narrations; Jeremy’s and the voice in Jeremy’s head. Then the author adds the narrative of Cass which changes the focus. I miss the tension of Jeremy’s conflict as he questions his sanity. This part is lost to a certain extent and doesn’t come back until later in the book. In fact, the alternating of the three narrations can become a bit confusing. The task of balancing a love story, socio-political satire and a straight-out horror action tale becomes sometimes a little precarious and I wondered occasionally if the author was taking too much on in one story.

Yet there is more right than wrong here. If I was thrown a little by the middle, the author does manage to pull all parts together in a solid and definitive ending. Despite some  issues, Murderland is the work of a young but brave writer who isn’t afraid to take on the societal big guns with his pen…or word processor or typewriter or computer or whatever those cheeky little author bastards are using nowadays. Murderland is an exciting but insightful novel and if it isn’t totally perfect it is close enough and is causing that copy of Garret Cook’s Time Pimp sitting on my desk to scream at me, “READ ME, DAMMIT!”