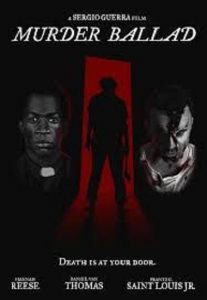 Not a moment is wasted in this ten-minute thrill ride from hell. The film opens while an obviously distraught woman named Lucinda (Hannah Reese) is searching through drawers as if her life depended on it, because it kinda does. Interrupted by a knock at the door, Lucinda is visited by a sinister minister, Deacon Ankou (Frantz G. Saint Louis, Jr., who plays the creepy ominous card to perfection). He too is looking for something: Lucinda’s ex-husband, Burgess. It doesn’t take a PhD in psychology to decide the reverend’s seductive charm with evil undertones aplenty, isn’t just some guise meant to woo distraught women on dark rainy nights.

The minister leaves and we meet the not-so-charming abusive ex-partner, played to a naturally menacing crescendo by Daniel Van Thomas. The combination of his natural, terrifying presence coupled with Hannah’s intense delivery is the cinematic equivalent of nail on head. When our abuser lashes out, Lucinda’s not the only one to fell a lingering sting.

Even as Hannah tries to fix her ex’s wounds after his latest stick-up job, the verbal and physical barrage is unrelenting. When Lucinda finally snaps, we can all but feel the years of subdued fear and pain and hate ripped from her core in a single gutsy ploy that seemed to shock her as much as it does her viewers.

The experience is accentuated by a palpable atmosphere with perfectly cast shadows and grey tones. Deliberate camera angles are also well utilized to inject us as close to the frenetic action as we care to get. While the final moments were rendered a bit abruptly for my liking, when considering how beautifully intense the overall theme was executed, unlike the sins of Lucinda and Burgess, that’s a quibble easily forgiven – by hitting the replay button. 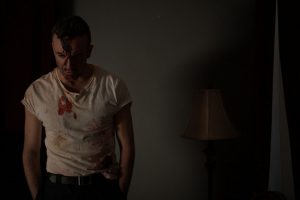