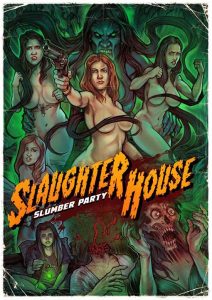 The raunchy fun starts with a scantily-clad woman puking in the crapper before psyching herself up to get back to the party. Hey, isn’t that how slumber parties are supposed to end, not start? Our pukey partygoer goes on to share her inner dialogue with the bathroom mirror (or is it us?) and sets the tone for the confessional-inspired style the rest of the slaughterhouse attendees provide throughout the film. Oh, and if you’re the kind of moviegoer who enjoys porn for its snappy dialogue: while you’ll find plenty to love here, it probably won’t be the dialogue, despite some hysterical zingers, to the delight of my twisted humour.

When our hostess (Kayla Elizabeth) introduces her new friend, Gretchen (J. Ania Lupa), there’s nothing evasive about the newbie’s intentions. Turns out, the comically serious Gretch is really a demonic witch desperate for immortality. When she unleashes her fury with the help of some wacky CGI minions, you best get ready for a gore-soaked extravaganza and, oh yes, there will be boobs.

The film allows the weird drama to get real long enough for a romance to blossom amid the chaos. It’s from this unexpected development we’re gifted the sage words, “if all we loved were perfect things, none of us would love nothing.”

A love letter to the trashy splatter films of yore, SLAUGHTERHOUSE knows exactly what it is and probably had as much fun making it as you’ll have watching it. I mean, how often can you utter ‘exploding tentacled tits’ and mean it? Accompanied with such gems as “I bet you wish my fist was a pussy cuz you’re gonna eat it,” the movie easily shoehorns its way into the perfect popcorn movie category, even as it’s burning the butter off your kernels.