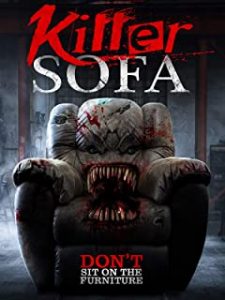 Until last weekend, I was unaware of how much I needed Killer Sofa in my life. The Amazon blurb reads as thus: “When a killer Lazy Boy chair falls in love with a girl, it’s up to a disgraced Rabbi and a couple of brokenhearted detectives to figure out how to stop the bloody carnage that will follow.”

Let’s break that down, shall we?

Killer Lazy Boy: This is, in fact, the only flaw in this production. The monster is not a sofa, as the title signifies. Once I got past the initial disappointment (as I had been picturing a very quaint loveseat, once owned by a grandmother-type who lovingly covered it with doilies and plastic slip covers) I came to appreciate the recliner that was the star of the film. It was a dusty, worn chair, the type you would acquire from Goodwill or the Salvation Army. It also had actual facial expressions, as its decorative buttons were fashioned to look like eyes, and the creases on the “face” resembled a smile or grimace (depending on the chair’s emotions).

Falls in love with a girl: the only thing better than a creature feature is a creature feature where the monster is in love. Love makes us do ridiculous things, and recliners are not exempt to this folly. The girl in question happens to be the incredibly irresistible Francesca. Francesca has a certain je ne sais quoi that makes men (and some women) become extremely “dedicated” to her (i.e. they stalk her). Her magnetism is a key part of the plot.

Disgraced Rabbi: Killer Sofa is an equal-opportunity film in terms of religion. Appearances are made by Voodoo, Judaism, Satanism, and Catholicism. I don’t want to give away the reason a Rabbi is necessary, but it has something to do with the type of demon that is inhabiting the Lazy Boy.

A couple of brokenhearted detectives: That would be detectives Gravy and Grape. Gravy is male, and not immune to Francesca’s powers. Grape is driven and serious. They are the New Zealand version of Mulder and Scully.

The bloody carnage that will follow: This is the best part. There is one scene in particular, involving an unattended vacuum cleaner nozzle, that was simply perfect. The recliner is a creative killer, working with the little it has in highly effective ways.

This movie was campy and fun. It is a wonderful distraction from the very real anxiety we are facing daily. If you are seeking silly escapism, Killer Sofa is for you.