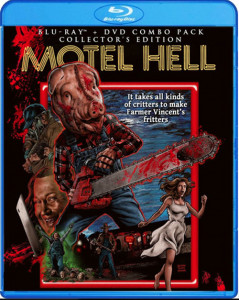 No, this is not the new reality show with Gordon Ramsay, this is the classic not-quite-slasher flick with the awesome title, Motel Hell. Made in 1980, before the slasher boom really got blooming, this movie has long been lumped in with the slasher genre, but it really doesn’t follow any of those tropes or conventions. It is also a cannibal movie (mild spoilers for a thirty plus year old movie), and yet there is very little meat eating or gut munching going on here. Heck, it’s not even all that much about motels, but I guess that title was too good to pass up, and a far sight better than ‘Farm Hell’ like is should have been called. So, what kind of movie is Motel Hell? It’s a black comedy, but is it any good? Well grab a bib, bring your appetite, and let’s find out.

Brother and sister, Vincent and Ida Smith, run a little hotel, but their main claim to fame is Vincent’s tasty meat snacks that no one can seem get enough of. Despite what his jingle says (it takes all kinds of critters to make Farmer Vincent’s fritters) the main critter the Smiths use is people. How they get that meat is by ambushing people on the highway with a number of varied, and often funny, ways. Yes, they only ever take one swinging couple from their motel, which is yet more evidence that this movie should have been called “Meat Farm” or something, but I digress. Well one night Vincent falls for the pretty lady that’s part of the couple he ambushes on the road. So he brings her back to recover at his motel with him and his sister, while his brother, the local sheriff, looks into the “accidental” death of the girl’s boyfriend. No, the cop brother isn’t in on Vincent and Idea’s butchery, he’s just kind of dumb. Before you can say, “man that’s some tasty jerky”, a love triangle develops between the brothers and the girl, as for Ida, she’s too busy tending the family garden to get involved with all that.

Oh, did I forget to mention the Smith garden? Yeah, that’s where the crazy really gets going in this movie, because that’s where Vincent and Idea plant their victims, literally, while they’re still alive, but with their vocal cords cut so they can’t scream for help. They keep them there until they’re ripe (?) and then they harvest them. How this is accomplished, I’ll leave for you to discover, but it always makes me laugh. As doe the climax, complete with pig heads, a chainsaw duel, and the most memorable final line by a killer ever.

Now for all the extra special ingredients that’s stuffed into the savory sausage that is this Blu-ray/DVD combo pack released by Scream Factory. There is an audio commentary with the director, Kevin Connor, moderated by Dave Parker who was the director of the very fun The Hills Run Red (2009). There is a retrospective/making of featurette called “It Takes all Kinds” that runs 24 minutes, an interview with the cinematographer of Motel Hell, Thomas Del Ruth, called “Shooting Old School” that runs 24 minutes, and “Ida, be they Name” which is an 18 minute look at some of the frightful female villains of horror movies. There is an interview with Rosanne Katon, who played one of the miscellaneous victims in the film, that’s over 11 minutes long, and another interview with Paul Linke, who was the rather dimwitted sheriff and little brother to Vincent and Ida, that’s about 15 minutes. A trailer, behind the scenes gallery, and a poster and production gallery brings this collection of tasty extras to a satisfying conclusion.

Motel Hell is a whole lot of fun; a horror comedy that’s probably more interested in the laughs than the chills, but that’s okay with me when it works, as it does here. It is not a slasher, despite what anyone tells you. It is a unique movie that pretty much unlike anything else out there, and that’s a good thing. As for this new Blu-ray/DVD, it is a very good thing, another winner from the fine folks at Scream Factory. It is very highly recommended. Grab a copy for yourself when it comes out August 12th.