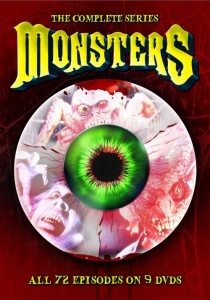 The thing about nostalgia is, if you revisit what’s giving you the warm fuzzies, you often find your memories more pleasing than the actual thing. Knowing that full well, when I got this new DVD set in for review, I was all prepared for a letdown.  You see, when it ran from 1988 to 1991 I was in my teens and a horror fanatic, so Monsters was right in my wheelhouse. I loved this scary, sometimes silly show to death, but how would I like it twenty plus years later?

But before I answer that, a brief history lesson for you youngins out there. Monsters was a horror anthology TV show that ran for three seasons. It was much in the same vein as Tales from the Darkside or Twilight Zone, although as the name implied, every episode was about a different monster. It was the very definition of a monster of the week show, and all the old fearsome favorites could be found in it, from vampires, werewolves, zombies, and ghosts, to living sickness, killer mannequins, sexy queen bees, and deadly dinosaur people. And unlike many modern anthology shows, Monsters actually had some talent in the story department, with tales form David Morrell, Dan Simmons, Robert Bloch, F. Paul Wilson, and more.

Now not everything about this show was rosy. While it tried to be scary most of the time, it would sometime fail, or it would have the occasional humorous episode, often with mixed results. Thankfully, Monsters was far more hit than miss. It also had makeup legend Dick Smith to fall back on as a special consultant, to make sure the titular monsters were more creepy than campy.

At least, that’s how I remembered it.

Popping in these DVDs I first noticed how bad the show looked. The video format was standard and the quality was akin to that of a 70s soap opera. As I continued to watch, the quality did seem to improve slightly, but it never got great or anything. Then there was the complete lack of extras on any of the discs. Sure, this was a mostly forgotten TV show from over twenty years ago, but you figure they could have done something for it. But no, not here.

So that was the bad. Thankfully, there was also a lot of good. First, this box set contained every episode of the show ever mad. That was three seasons, 72 episodes, on nine DVDs. Even with each episode only being 22 minutes or so, that’s a whole lot of terror television in one place and for one price. Then there were the episodes themselves, and thankfully, they did live up to my memories of them. Mostly. Sure, some didn’t age all that well, some of the seams on the makeup effects were more noticeable by today’s standards, and there was slightly more camp lurking around the edges than what I remembered. But by and large, Monsters was frightful fun that, as a bonus, could be enjoyed by the whole family. So if you liked this show as a kid, now you can share it with your own kids. Don’t focus on how old that makes you feel, just enjoy the circle of life and share some Monsters with your own little monsters. Or hey, just give them a watch yourself.

Monsters the Complete Series is a blast from the past that does not disappoint. If you got a thing for all kinds of monsters, then this is the show for you. Consider it highly recommended