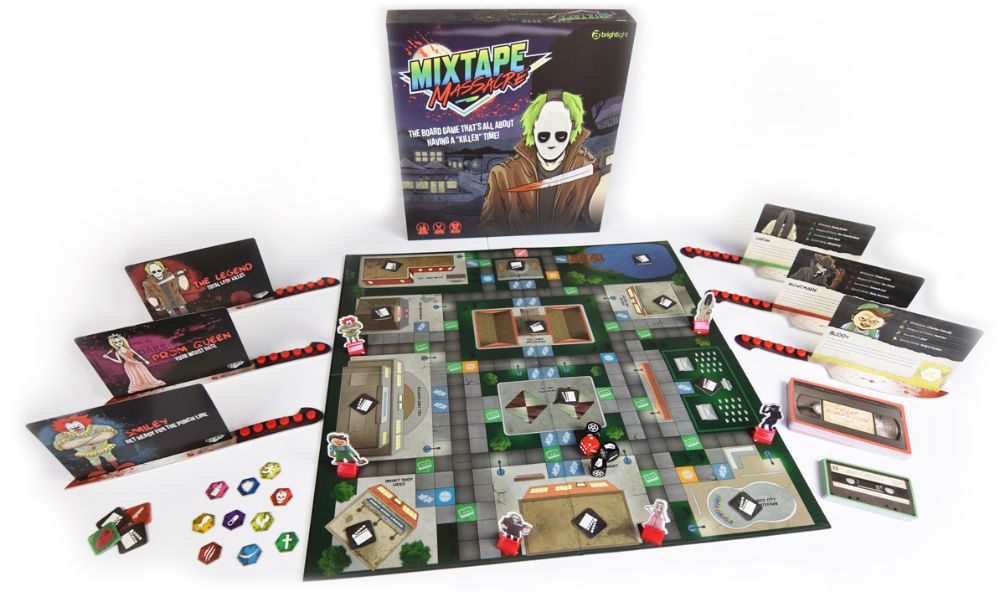 In this digital age, as amazing as it seems, board games are incredibly hot again. I guess they never went totally cold, but now that it is easier than ever for small companies to make their own professionally looking games, a specialized boutique board game business has sprung up. These cater to a smaller, niche market and offer experiences far different than Monopoly, Life, or Candy Land. And in my opinion: far better.

Into this arena strides game designers Brightlight with their crowdfunded game, Mixtape Massacre. Set and themed in the 1980s, it’s like a classic slasher movie come to life. Two to six people can play at a time, and they choose from ten different iconic archetypes made famous from those famous fright flicks. No, they’re not Freddy, Jason, Leatherface, and others because, you know, copyright. Instead you get a big, beefy hillbilly with a chainsaw named Eddie, the insane cannibal doctor known as Dr. Ravenous, the burnt-faced, clawed-handed Frank, the little possessed girl, Sarah, etc. Yeah, you know who they’re supposed to be, and a rose by any other name and all that. Each one of these kooky killers have their own, unique power that further separate them from their bloody brethren. Lastly there are ten standing cardboard special ability tokens.

You then take these psychos and have them haunt and hunt the dark streets of a little town called Tall Oaks. Their main goal is to kill various victims hidden in buildings and locations in town, as you would expect in a movie…sorry…game like this. But they can also fight each other if they cross one another’s paths. That’s why each killer has a small pool of hit points. Run out of hit points and its game over for you. To add to the challenge, sometimes a would-be victim puts up a fight and then your little killer must defend him/herself or else lose a number of hit points. So not only do you have to outpace your fellow players in the collection of trophies from your victims, you have to outlast them, too. All along the way you can sometimes pick up “bonus track” cards. Some of these do good things for your killer, some don’t. Such is life, no?

What sets this game apart of the rest of the pack is style. First, the art style is cartoony and fun, well done with lots of bright colors. Then there are the killers. As I said, that are analogs for the classic slashers we all know and love, so that’s fun, but each come fleshed out with a little backstory that is equal parts humor and horror. Lastly, and the big reason I personally love this game, is the 80s aesthetic. From each killer having their favorite genre of 80s music, to various nods in the victim and bonus cards. Such winks and nods include a guy holding a boom box over his head, a teen dressed in a karate gi getting ready to fight you with the devastating crane kick, a long-coated rebel walking across a football field, one hand raised triumphantly in the air, with the card’s title being: “Did you forget about me?” If you are a fan of movies from this era, you’ll love all the references. Perhaps my only gripe at all about the game is the need for more victim cards. You do get a bunch, but during play you’re going to see a lot of the same cards over and over again. Here’s hoping the Mixtape Massacre masters do some more for an expansion or an add-on or something. But yeah, if that’s all I can think of to complain about, that should tell you how good this game is.

In summation: if you are a fan of 80s (and to a lesser extent, 70s too) horror movies, or a fan of clever, well-designed board games that are a ton of fun, or best yet – a fan of both, then this is a must-get. I absolutely loved the game and had so many laughs playing it with friends, so Mixtape Massacre gets a very high recommendation from me. To order a copy for yourself direct from the game designers, go here: